Ford Ranger 'Raptor' Spied Up Close And In Detail 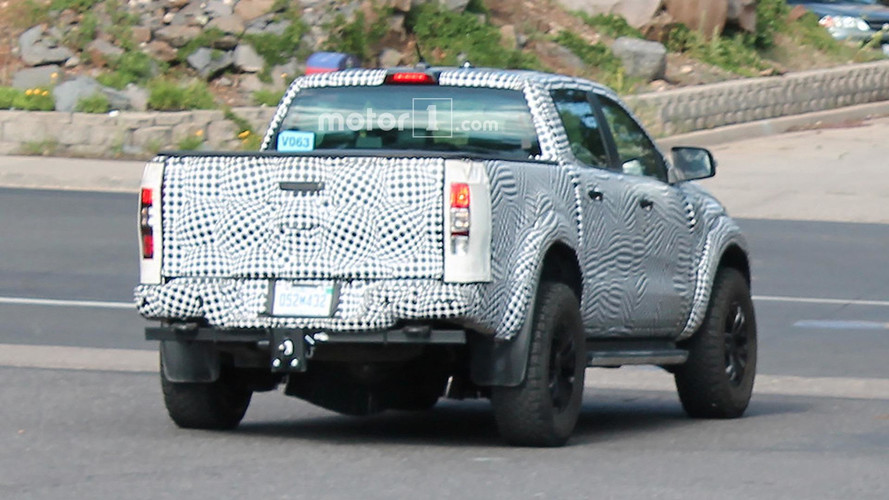 We’re still more than a year away from the debut of the highly anticipated Ford Ranger. The Blue Oval announced the arrival of the small pickup, and the Bronco SUV, earlier this year at the Detroit Auto Show. Previous spy shots have suggested a "Raptor" variant could be in the works, but now our spy photographers have managed to get up close and personal with the supposed high-performance model.

The detailed spy photos show that the supposed Ranger Raptor will get a set of 285/70 R17 BF Goodrich All-Terrain TA tires, similar to the ones found on the Jeep Wrangler Rubicon. Even though the photographer managed to get underneath the vehicle, much of the undercarriage was camouflaged, hiding all the details of the suspension.

Power for the prototype pictured here came form a diesel engine, likely a 2.5-liter inline-five cylinder, confirming that the Ranger Raptor will take the fight directly to the Colorado ZR2, which comes equipped with an optional 2.8-liter diesel with as much as 181 horsepower (134 kilowatts).

Contrary to previous Ranger spy shots, this prototype features a more aggressive front end, in line with the larger F-150 Raptor. Other styling changes include wider fenders, bigger shocks, and an increased ride height overall. Apart from the diesel option seen here, the Ranger Raptor will likely come standard with a smaller 2.7-liter EcoBoost V6. Power will be paired to a 10-speed automatic co-developed with GM.

The standard Ford Ranger will make its debut in 2019 as a 2020 model year, likely on display at the Detroit Auto Show. The hardcore Raptor version likely won’t make its debut until later in the year, or the following year. Until then, we’ll continue to keep an eye out for more of these early prototypes.