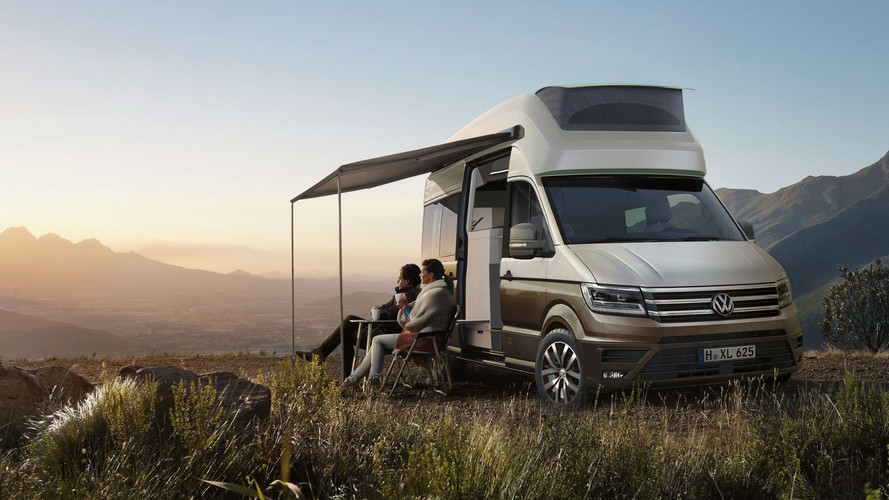 You'll be at home wherever the road will take you.

When it comes to practicality, few vehicles out there can compete with the motorhome conversion for the Crafter. Volkswagen Commercial Vehicles will be attending the Caravan Salon Düsseldorf (August 26 – September 3) in Germany with a conceptual version of the new Crafter inspired by the T6 California and tailored to those in the market for basically a house on wheels. It has everything you would ever want in a motorhome, including a wet room with shower.

The California XXL concept started off as a regular Crafter with a medium-size wheelbase and then it received a redesigned tall roof with special indentations to maintain roughly the same aerodynamic efficiency as the regular version. But most of the magic happened inside the gargantuan cabin that has enough room for a two-meter-long bed. The front seats can be rotated 180 degrees and there’s also a bench seat for all members of your big family.

The fully equipped kitchen installed by VW comes nicely equipped with a twin-hob cooker, a fridge, an extendable work surface, and a sink. There’s also ambient lighting to provide a cozy atmosphere while the window blinds guarantee privacy whenever you need it. A screened-off, spacious living area serves as the highlight of the motorhome conversion.

VW isn’t saying for now whether the California XXL concept will be put into production, but it does mention it will provide more details following its public debut at the end of the month. The motorhome conversion comes about a year after the introduction of the all-new, Poland-built Crafter available with three different lengths, three heights, four 2.0-liter diesel engines, and a choice from front-, rear-, and all-wheel drive.

As a final note, the California XXL is not the first concept to be based on the new Crafter as an electric version was shown last September. Suitably called e-Crafter, the production-intent vehicle had a maximum range of 124 miles (200 kilometers) while power was rated at 134 hp (100 kW) and 214 lb-ft (290 Nm).

Highlight of Caravan Salon this August:
California XXL motorhome concept vehicle on the basis of the Crafter

Hannover, 11 August 2017 – The Volkswagen California based on the most popular campervan ever – the Bulli - serves as the archetypal motorhome. For decades it won the hearts of thousands, especially experienced camping enthusiasts, with a systematically thought-out and highly flexible interior. Now, the new and bigger Crafter with its large number of driver assistance systems, comfortable handling and low fuel consumption offers a unique opportunity to transfer the qualities of the California to the next size up in Volkswagen motorhomes and to refine these still further. The California XXL concept vehicle now being presented by the Hannover-based manufacturer is a more fully-grown variant of the motoring globetrotter.

California XXL provides a look into the future of the Crafter motorhome, featuring fixed high roof, kitchen and wet room.
The innovative vehicle body and interior layout creates lots of space inside the California XXL, including for a comfortable bed around 2 metres long. On top of that, a screened-off, spacious living area allows astonishing freedom of movement. A bench seat and the front seats, which can be rotated 180 degrees, provide plenty of room. Typically designed for the purpose and practically thought out as in the California are the kitchen with twin-hob cooker and fridge, sink and extendable work surface. Thanks to the large dimensions of the California XXL, a cleverly devised wet room with shower and WC facilitates added comfort.

Despite its size it cuts through the air well. Even given a height of 2.9 metres, sophisticated aerodynamics (including special indentations in the completely redesigned high roof) ensure that the drag coefficient remains within the favourable range of a conventional Crafter.

Further information on the new California XXL concept vehicle will follow in the course of its world premiere: It is being unveiled at the 'Caravan Salon Düsseldorf' (26 August to 3 September 2017).