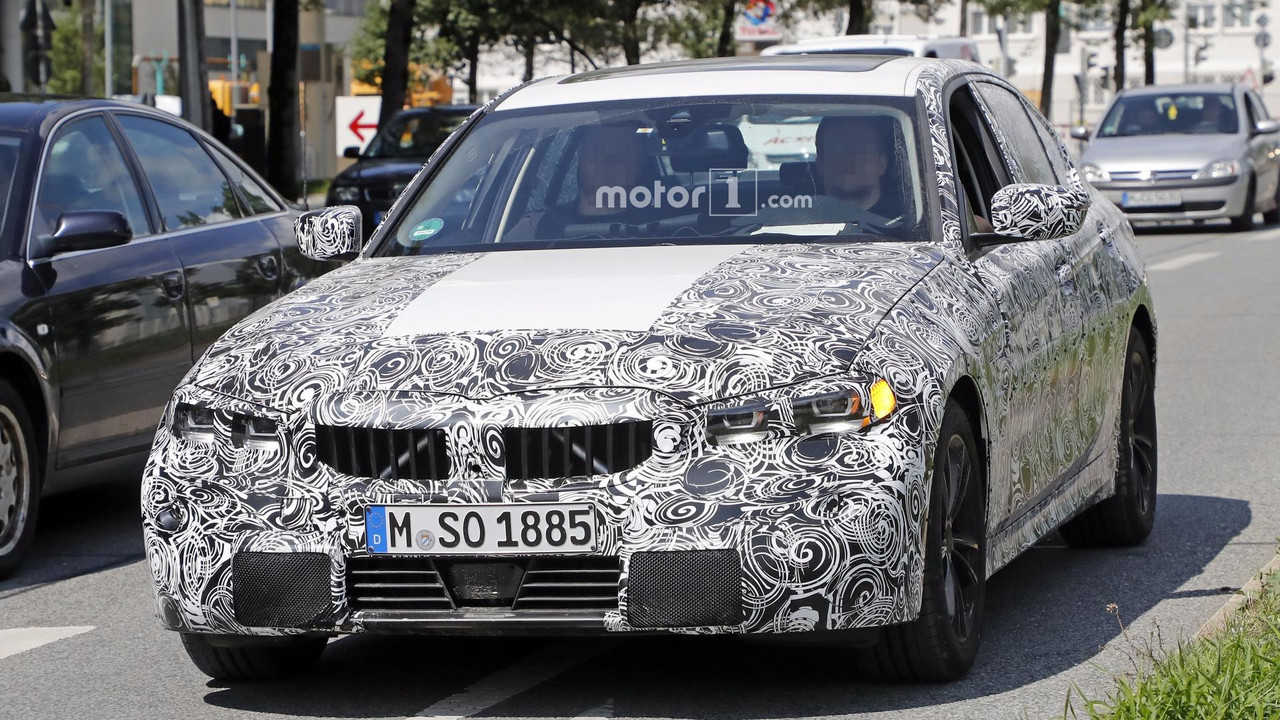 The hood's contour looks really weird, but that's because the camo is playing tricks on us.

BMW’s best-selling model is getting ready for its seventh generation and our spies have managed to catch on camera a prototype of the 3 Series (G20) from a close distance to reveal more of the details. At the front, we can have a good look at the production-ready headlights, which are significantly different than those of the current model. The shape of the clusters has been altered and now these appear to have a sleeker look and come with more angular “angel eyes.” Because of the disguise, we can’t really tell if these will be once again connected to the kidney grille.

Speaking of which, the grille’s vertical fins appear to be slightly wider than they are now on the outgoing 3 Series to give the compact sedan a more aggressive look. You’d think the hood’s contour above the grille looks like a moustache, but that’s only because BMW decided to install extra panels to conceal the design. As a matter of fact, check out the multitude of black rivets slapped all over the body to hold in place the additional panels hiding what is likely the final body.

The back of the car allows us to catch a glimpse of the taillights, but these remain partially hidden underneath a semi-transparent piece of camo. It seems highly unlike the rear lights will be this small as we have a feeling these will extend onto the trunk lid like they do on the current 3 Series. You can actually see cutouts in the swirly disguise on the trunk lid and those are likely for the reverse lights.

What the camouflage can’t do is mask the increased size of the 3 Series as the rear doors seem to be longer, which indicates the wheelbase has been stretched to free up more rear legroom. Better packaging brought by the CLAR platform could further improve the amount of space inside the cabin, while the trunk’s capacity might grow as well.

But despite the bump in size, we’re expecting the 3 Series to lose a few thanks to the new underpinnings already used by its bigger brothers, the 5 and 7. Rumor has it the gasoline engines will gain on average about 7 horsepower and 15 pound-feet of torque while slashing CO2 emissions by approximately 5%. The diesels are also going to be massaged to extract more Bavarian muscle and will become cleaner as CO2 emissions will supposedly go down by 5% as with the gasoline mills.

The thrifty 330e plug-in hybrid will get a power hike as well and it will be joined by a more attainable 325e. There’s a good chance BMW will remove the combustion engine altogether by coming out with a pure electric derivative. It might actually be previewed as early as next month at the Frankfurt Motor Show if we were to rely on the rumor mill.

The next-generation 3 Series should land at some point in 2018 as a sedan, with the wagon to follow shortly. There might not be a 3 Series Gran Turismo as the GT is rumored to become a member of the 4 Series family, much like the 5 GT is now rather confusingly the 6 GT.