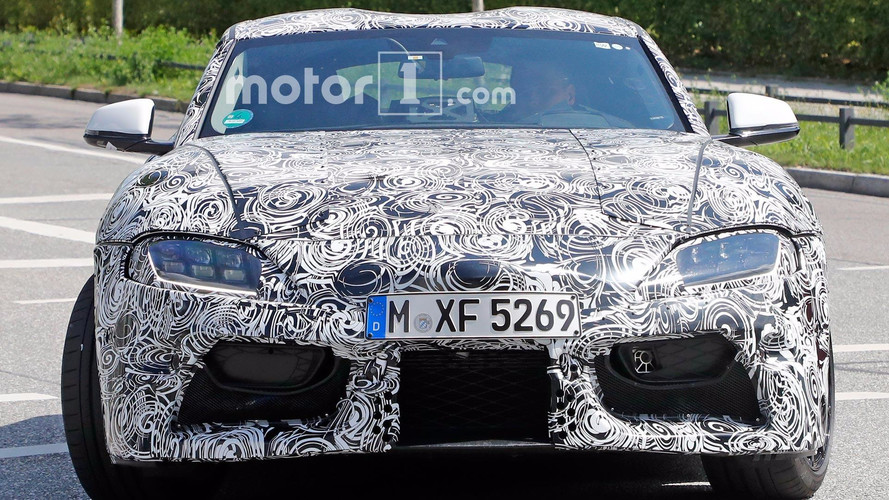 These photos offer a fantastic look at the new Supra, too.

A new batch of spy photos reveals the upcoming Toyota Supra on the road with a set of LED headlights. Previous pictures showed the coupe with halogen units.

How The New Supra Drives:

Each light features an array of three LED projectors. Toyota's camouflage attempts to hide the L-shaped LED running light along the bottom but fails. Presumably the turn signal is in the corner, but the concealment doesn't let us see it. For aesthetics alone, these parts would probably be worth the upgrade over the halogen lights (see below).

This Supra test mule doesn't appear to have any other changes versus earlier examples. However, these are fantastic, close-up images of the upcoming coupe. Looking at the details, it seems that the vehicle might have a clamshell hood. The gaps running up the front appear fake. In contrast, the seam that goes underneath the windshield and around the fenders is part of the body's design.

It continues to look like the new Supra takes the majority of its aesthetic cues from the 2014 FT-1 Concept (below).

Recent news has given us the potential details about the Supra's engine lineup. A leaked internal document indicates that Toyota could take a four- and six-cylinder engine from BMW, and only an automatic gearbox would be available. However, the Japanese automaker could still supply its own powerplant for a range-topping variant. Rumors and patent documents hint that this could be a turbocharged hybrid, possibly with an electrically powered compressor. This variant could carry Gazoo Racing branding.

According to a Japanese magazine, Toyota will unveil a Supra concept in October at the 2017 Tokyo Auto Show, and it'll look quite close to the production version. The unveiling of the production version will happen sometime in 2018 because the Magna Steyr factory in Graz, Austria, will begin building the coupe that year, along with new BMW Z4 on the same platform.