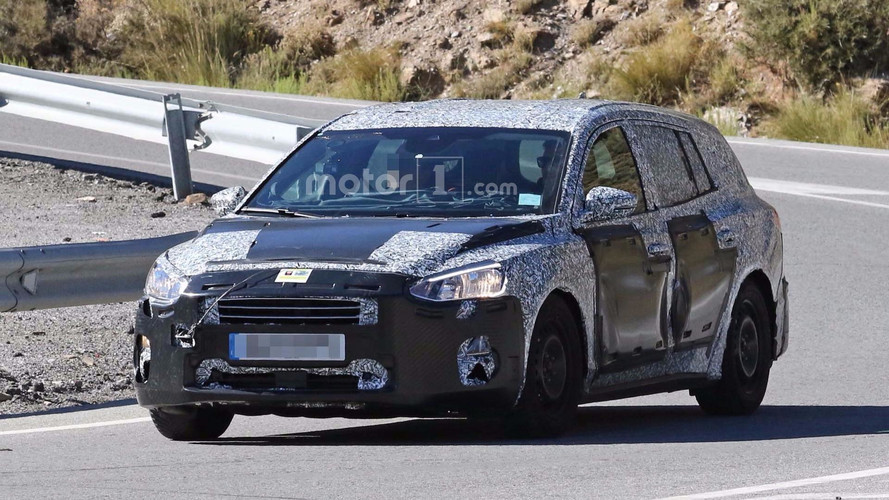 We got our first look at Ford’s new Focus wagon a few weeks ago, but the latest round of spy photos does reveal a bit more detail. We can see the sculpting a bit clearer for the side windows and how both the C and D pillars are shaped. We aren’t entirely sure why this model is wearing a set of steel wheels, unless we’re seeing a utilitarian or perhaps even a municipal version undergoing testing. Looking close, we once again see the small cameras in the grille up front that we mentioned in the previous article, suggesting higher-level autonomous functions could be coming for the future.

One thing that remains clear is that Ford is addressing the critics who’ve panned the cramped interior space afforded by both the sedan and wagon variants. This second round of wagon photos reminds us just how much bigger the new Focus will be compared to the current model, which holds true for the wagon as well as the sedan and hatchback models. Thus far we’ve only seen heavily camouflaged versions the new lineup, but renderings we posted from Cars.co.az a couple weeks ago help give us an idea of what the new car might look like.

It’s believed that Ford will choose to not bring the wagon to the United States, leaving such duties for people and things to the new EcoSport and Edge crossovers. The sedan and hatchback models that do arrive will likely feature turbocharged engines exclusively to haul the heavier designs. Across the pond, European shoppers will probably have a naturally-aspirated base engine as well as boosted versions to choose from.

All our questions should be answered early next year, with the hatchback possibly having its debut at the Geneva Motor Show in March.