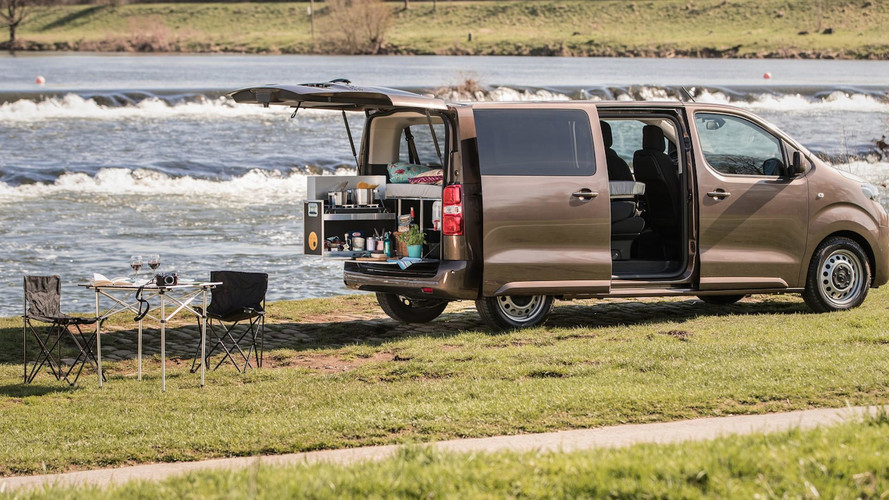 The Toyota ProAce, first introduced in 2013, is a family-friendly, road-tripping, European-only minivan, with room enough for five or seven passengers, depending on the spec. So it makes sense that Toyota would eventually introduce a version that’s as suited for the destination as it is the trip.

The ProAce Verso camper, which comes fitted with a Ququq Camping Box, turns the rear of the minivan into a camper for two full-sized adults. The limited edition trim will be available in Germany exclusively. The package includes a fold-out bed, a stove, two sinks, and a storage compartment. It can be ordered on the Compact, L1, or L2 versions of the Proace.

Here’s how it works. Depending on which model you choose, five- or seven-passenger, the double bed takes the place of the second row of seats, and lies neatly in front of the third row, which is pushed and folded all the way back. The rest of the components can be accessed from the tailgate, with an optional Ququq "Midibox" that can be had for an extra €2,790 ($3,280), as well as a camping set with a table and two chairs available for an extra €99 ($115).

For those traveling with more than two passengers, you can add on a Dachzelt ARB Simpson III tent to make it a fully-fledged camper. The tent adds an extra 2.4 by 1.4 meters of sleeping space in the rear, and can be constructed in 15 to 20 minutes, depending on skill set. The tent is an extra €1,600 ($1,880) on top of the price of the original pacakge, while the roof rack necessary for transport is an extra €398 ($465).

The new QUQUQ Camping Box is the perfect fit for the Toyota Proace Verso (combined fuel consumption of 6.0-5.2 l / 100 km, CO 2 emissions 159-137 g / km) Turn around turning into a camper for two. The box of the camping specialist includes a fold-out double bed, a stove, two water bowls and bowls as well as storage space and can be ordered for the Proace variants Compact, L1 and L2.

The camping box is therefore suitable for the five-seat versions of the Proace Verso as well as for the models with a third seat row. It is recommended to extend the third row before using the box. Before use of the double bed, the rear seats are pushed all the way back and folded back. On special support legs and rails, the bed is then folded out and held above the seat backs. The other components of the camping box can be used from the tailgate. Toyota offers the QUQUQ "Midibox" as original accessories through its contractors for 2,790 euros, in addition, a camping set with table and two chairs for 99 euros is available.

If you are traveling with more than two vacationers, you can extend the Proace with the Dachzelt ARB Simpson III as a fully-fledged camper. The tent offers an additional lying area of 2.40 by 1.40 meters and can be built up within 15 to 20 minutes. It costs 1,600 euros and is also available from the Toyota Partner. An original roof rack (2 pieces) is required for the transport and attachment of the roof tile at a price of 398 euros.

Awnings from Sunseeker (299 and 309 Euro respectively), which are suitable for the Proace with tailgate or rear wing doors, are suitable for optimal sun protection. Here, too, roof support beams are required for mounting. The awnings can also be extended by a front wall and side walls.

Toyota offers the large-capacity Saline Proace Verso in various versions and equipment versions with space for up to nine people. Prices start at 35,300 Euros (VAT included).