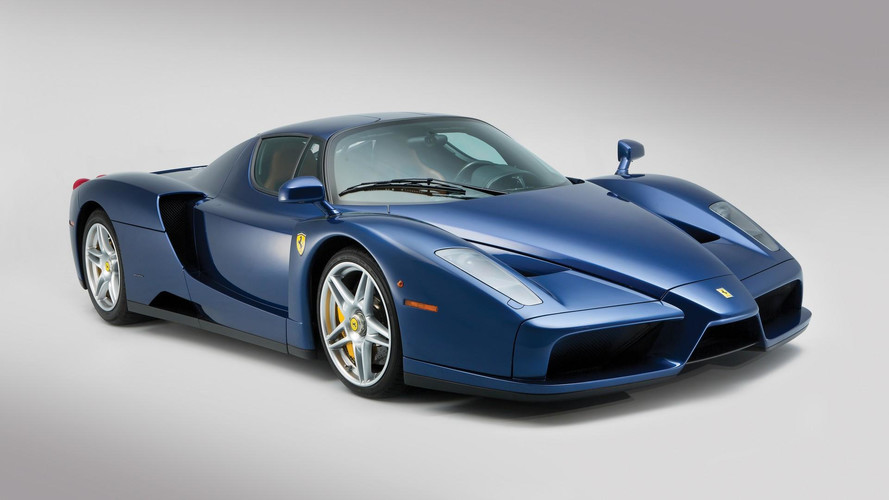 It crossed the block earlier in the day at the RM Sotheby's London sale.

From the moment it was introduced, most people knew the Ferrari Enzo was destined to be a classic. This particular example, a 2004 model, not only bears the same iconic personality, but also a unique exterior finish that should help it stand out from all the rest. It’s heading to auction later this month as part of the RM Sotheby’s London sale.

Originally finished in Matt Titanio Extra Campionario – the only example to wear the hue from the Ferrari factory – the Enzo was refinished a number of years later in the unique Blu Tour de France pictured here. The supercar has driven just 5,520 miles (8,884 kilometers) since new, and is Ferrari Classiche certified, complete with a dealer service history, original books and tools, and its Classiche binder.

The car was purchased new in 2004 by Prince Akim, member of a Middle Eastern royal family in London, and registered on U.K. plates. It was sold again in 2008 at the RM Auctions’ Leggenda e Passione sale at the Ferrari factory. Its new owner, an Asian mining magnate, would keep the car meticulously maintained in his collection alongside a number of other unique vehicles, thus keeping mileage to a minimum.

The original 6.0-liter V12 remains producing 660 horsepower (492 kilowatts) and 484 pound-feet (656 Newton-meters) of torque. The interior wears a handsome Pelle Cuoio leather finish with carbon fiber and black leather accents on the dash. This one-of-a-kind Enzo will cross the block when the RM Sotheby’s London auction takes place on September 6, 2017. No estimates on how much it might cost, but don't expect this stunning supercar to come cheap.

THE GENESIS OF THE ULTIMATE FERRARI

After F50 production concluded in 1998, tifosi dreamt of what exotic machine Maranello would devise next—and what form it would take. Speculation was rampant over whether the next model would employ a rear-mounted V-8 or V-12, and if the packaging would be spartan and purposeful like the F40, or luxurious and evocative of vintage designs like the F50.

In mid-2002, Ferrari president Luca di Montezemolo ended the wait with the introduction of the forthcoming Ferrari Enzo. Though the model’s name required no explanation, he reasoned that after Ferrari had named cars for historically important locales like Maranello and Modena, the time had finally come to honour the company’s founder. He also clarified that the new model would have a strong connection to Formula 1 racing, as the manufacturer had just won the 1999 and 2000 Manufacturers’ Championship and the 2000 Drivers’ Championship. Michael Schumacher was, in fact, just getting started on his historic dominance of Formula 1, a still unequalled feat of five consecutive championships.

Formally debuting at the 2002 Paris Motor Show, the Ferrari Enzo certainly delivered on the premise of its design brief. Like a Formula 1 car, the Enzo utilized futuristic materials to achieve maximum weight savings, with a foundational chassis tub made of carbon fibre and Nomex honeycomb weighing just 200 pounds. Aluminium sub-frames were then mounted on the tub, and these laid the groundwork for the mounting of Pininfarina’s unique coachwork.

Penned by designer Ken Okuyama during a lunch break, the Enzo’s external design mimicked the shape of an open-wheel race car, though as if wrapped in a skin extending over the fenders and cockpit. Aerodynamically perfected in Pininfarina’s wind tunnel, the body was comprised of panels woven from carbon fibre and Kevlar. Nineteen-inch alloy wheels, anchored by 15-inch Brembo carbon-ceramic disc brakes and unique scissor doors, respectively, completed the Enzo’s chassis and cabin, finishing a car that was highly technological and endlessly fascinating.

Into this phenomenal marriage of chassis and body, a new purpose-built engine was placed behind the driver, continuing the manufacturer’s long-running configuration for sports prototypes and hypercars. The concurrent 90-degree V-8 was essentially extended by two cylinders on each side and altered in angle, creating the 65-degree Tipo F140B V-12 engine. Displacing almost six litres, the F140 was the largest engine built by Maranello since the 712 Can-Am race car of the 1970s. It was packed with racing components such as Nikasil-lined cylinder walls, titanium connecting rods and a telescoping intake manifold designed to boost torque, ultimately developing 651 hp and 485 foot-pounds of torque, earth-shattering numbers even by today’s standards. The F140’s evolutions would go on to power the 599 series, the F12 Berlinetta and the LaFerrari.

With power transmitted via a six-speed dual-clutch transaxle that was actuated with column-mounted paddle-shifters, the Enzo reached 60 mph from standstill in just 3.3 seconds and a top speed of 218 mph. Production was eventually capped at 400 units, so this was a car whose engineering was also matched by its rarity. As unique and captivating today as it was in 2002, the Ferrari Enzo continues to hold sway with collectors, unmistakably carrying the mantle of Maranello’s defining millennial hypercar, the genetic link between the sensuous F50 and the hybrid LaFerrari.

This Enzo was originally delivered in the unique colour of Matt Titanio Extra Campionario, the only example finished in this unusual and lovely hue, over a Pelle Cuoio (4609) interior. It was shipped in November of 2004 to official dealer Forza S.p.A., which sold it to Prince Akim, member of a Middle Eastern royal family in London, England, for whom it was registered on UK plates ‘LF 54 ASO’. A factory Certificate of Authenticity, number 844 F, was issued on 6 March 2008, and the car was subsequently Classiche certified.

In 2008, the Ferrari was sold at RM Auctions’ Leggenda e Passione sale at the Ferrari factory, to a buyer working on behalf of an Asian mining magnate and passionate supercar enthusiast. This owner would maintain the car for the next six years, during which time it was refinished to his taste in its current spectacular livery of Blu Tour de France, before it joined the exceptional collection of its current owner. There it has been maintained alongside many fine coachbuilt automobiles from all eras, among which it appears right at home, and today reflects 8,884 km. It is accompanied by its full main dealer service history from new, original books and tools and its Classiche binder.

Remarkably well kept and stunning in its current colour combination, this car is unique among Enzos, and will certainly turn heads among even the most jaded enthusiasts of modern Ferrari supercars.