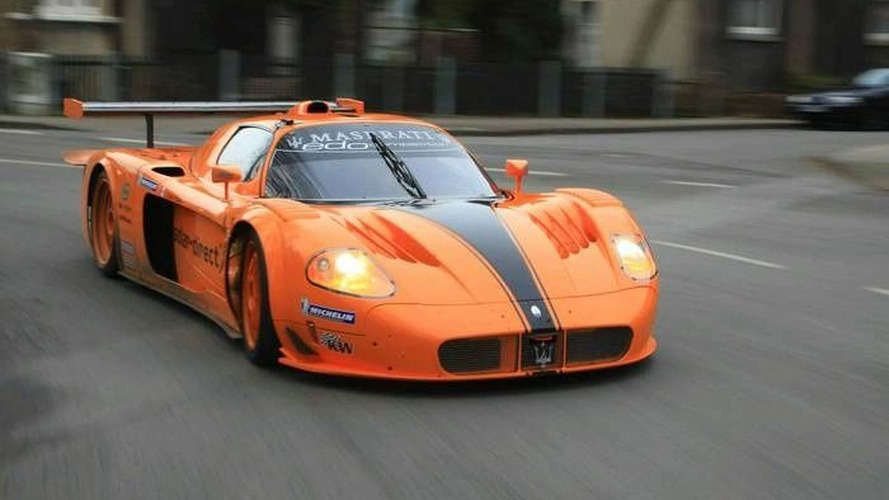 Maserati has built just 12 copies of the Maserati MC12 Corsa, a 755 bhp track-version of the Maserati MC12 priced at Euro 1.4 million, and German tuning house Edo Competition has one of them. Edo Karabegovic, founder of Edo Competition, has made the MC12 Corsa road-legal resulting in an absolutely unique super car. Our test driver extra-ordináire Nick Hall took the car for a spin last year, and said: “Seeing it was good, but driving it, well this might just be the ultimate test drive of the fastest weapon on the road today.”

What better way to show you what he meant than with actual test drive footage shot a little over a month ago in Ahlen, Germany. Zahir Rana of Canada, sports car dealer of ZR Auto Sales in Calgary, was the lucky man to sit in the passenger seat while Edo himself drove. Edo has held the Nordschleife lap record for street-legal cars and has worked on pretty much every super car.

The Edo MC12 Corsa is capable of hitting 100 km/h from standstill in under 3 seconds and 0 – 200 km/h in less than 7 seconds. This particular MC12 Corsa has a specially designed KW sport suspension with nose-lift functionality, ceramic-composite braking system, high-flow exhaust system, new performance wheels (19 inch in front, 20 inch in the rear), temperature controlled radiator fans, and immobilizer, lighting system and a horn.

Edo Competition's transcript of the day:

Ten track marshals position themselves at junctions and driveways to provide safety for the expensive test drive. A helicopter is on hand for filming, photographers and the local press are waiting; after all, an event like this has to be documented. The town of Ahlen was represented by Heino Hilbert, group leader for road construction and transportation, and deserves another thank you for the permission. More and more spectators are gathering to witness this unique event, which is a very different sight from the tractors and runners that are usually seen here.

Edo Karabegovic knows the car well. Last year the Maserati was driven extensively and the downforce levels were tested at Michelin’s Formula 1 test track in France. It does 326 km/h (203 mph) despite the short geared racing transmission. Therefore measuring the downforce is an absolute necessity for the future road rocket in order to permit driving at very high speeds.

After strapping into the custom-made ultra-lightweight carbon-fiber bucket seats using 6-point harnesses, everyone is ready for action.

Edo Karabegovic with co-driver Zahir Rana takes it easy at first. The Maserati bounces over barely visible bumps in the road. The suspension is adjusted. The top speed they’re able to achieve is not relevant, it’s the infernal acceleration that counts.

The low ambient temperature around the freezing point doesn’t exactly help minimize wheel spin upon acceleration. Only in 3rd gear can Edo Karabegovic get the throttle to the floor without having the car try to leave the narrow back road. The sequential racing transmission, lifted from F1 and installed in this monster, allows for sub-150ms shift times. The brutal acceleration provided by the 6-liter 755 hp engine taught the true meaning of “tunnel vision” to both occupants. Similar to rally footage on fast-forward, they’re shooting through space and time, the trees lining the road appearing like a solid wall. The Maserati zooms out of sight with rocket speed. No longer visible, but every shift is still clearly audible.

The car is not equipped with a heater, but neither of them is cold thanks to the adrenaline rush. The way even 5th gear still pushes you back into the buckets makes it seem like being launched out of a catapult can’t be any worse.

Zahir Rana is convinced. Having had the pleasure of driving the Maserati himself, he knows he’s come to the right place. He has never experienced anything like this before. Even Rana’s own yellow Ferrari Enzo in Canada, not exactly considered underpowered with 660 hp, does not accelerate in such a spectacular fashion.

After arriving at the turning point, a happy Zahir Rana gets out of the car. On thing is certain: after this impressive test drive, Edo Karabegovic will get two vehicles to modify. Whether or not he gets the MC 12 Corsa is questionable. After all, it’s owned by a customer and with a price tag of 1.4 million Euros it’s not a decision to make on a whim.

P.S. Meanwhile the police have joined us. They have to investigate a noise complaint from 6 km (4 miles) away.Official support is vital. We want to take this opportunity to thank everyone involved in the project, local residents and the town of Ahlen for their help in making this event possible.