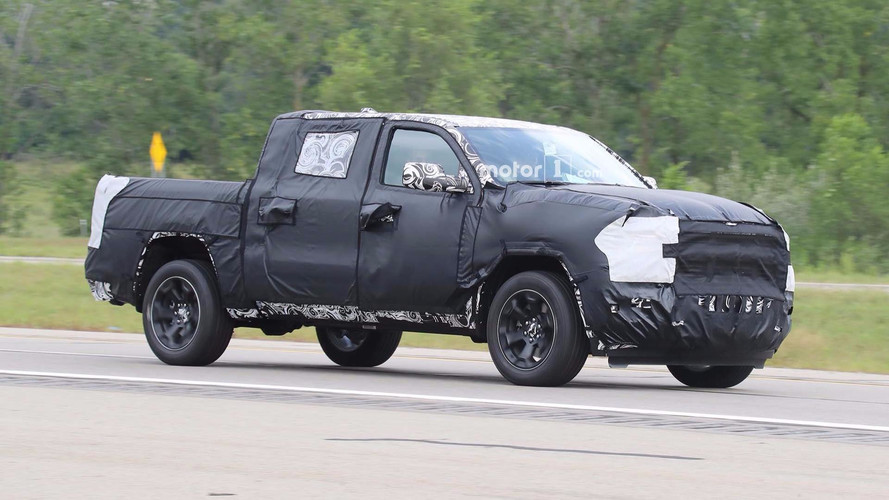 It will debut at the 2018 North American International Auto Show in Detroit.

Our omnipresent spy photographers managed to catch another glimpse of the new-for-2019 Ram 1500, only this time they got up close and personal. Outside we see the automaker is still trying to fool the masses with heavy camouflage up front that mimics the headlights of the Ford F-150, but one of the photographers got a look behind the coverings to show us a lamp housing that appears to be a slightly slimmer than what’s on the current model.

We also get a good look inside the truck to see a redesigned center stack, which appears to use a larger touch screen for the infotainment system. Instrument layout doesn’t appear to be much different from the current model, and we see the automaker is sticking with the shift knob on the dash for the automatic transmission. Overall, we’re expecting to see an upgraded interior with the latest UConnect systems and other technological gadgets, not to mention much more interior space as evidenced by the wheelbase on this particular model.

These new images suggest the Ram should also sport a nifty split tailgate option, along with the Ram Boxes and other cargo innovations. Power options will likely remain familiar with V6 and V8 engines carrying over, though a mild hybrid system possibly paired with a turbocharged four-cylinder is likely to appear.

All in all, expect the new Ram to continue building on the attributes that saw the current model surpass Chevrolet to become the second-best selling truck in North America earlier this year. That means more overall refinement for driver and passengers, more capability, and larger-than-life styling which has come to define the model.