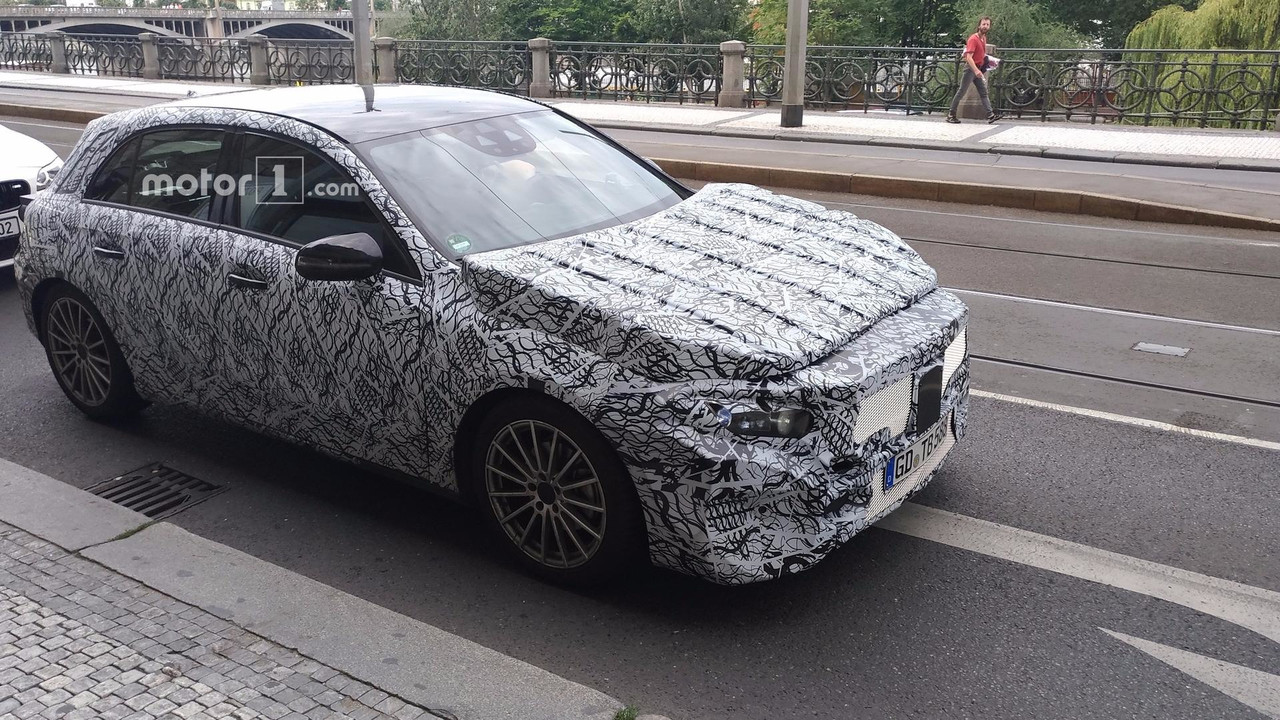 It appears to have a digital instrument cluster.

A Motor1 reader has spotted a heavily camouflaged prototype of the next-generation Mercedes A-Class while strolling along the streets of Prague. This was likely an early test vehicle judging by the ungainly extra layer of disguise slapped onto the car’s hood, which recent cars photographed by our spies did not have. The easiest way to identify the vehicle as a W177 model is by looking at the position of the side mirrors, which are now sitting lower on the doors.

While most of the dashboard remained hidden under a black piece of cloth, we can’t help but notice the car likely had a digital instrument cluster and a newly designed steering wheel. Previous spy images have shown the 2019 A-Class will make the transition towards a dual digital screen setup like the bigger Mercs, though the size of the displays will likely be a tad smaller.

Speaking of size, better packaging brought by the updated MFA platform should grant the 2019 A-Class with a slightly elongated wheelbase that will free up more space inside the cabin. The third-side window of this prototype seen in Czech Republic’s capital appears to be bigger than before, and that might be a sign the rear doors will be longer.

Mercedes has already made it crystal clear the new A-Class will be out in 2018, first as the five-door hatchback seen here carrying the production body. It will be followed by the usual members of the front-wheel-drive family, plus a first-ever A-Class Sedan and maybe a new crossover to slot between the GLA and GLC. Another novelty brought by the next generation will be an extra member of the family to slot above the A250, but below the range-topping A45. Latest reports are indicating it will be called A30 or something to that effect.

On the engine front, it is believed Mercedes and Renault have teamed up yet again for a new 1.4-liter gasoline engine codenamed “M282” and set to act as the base offering. A smaller 1.2-liter unit is also being prepared, but it remains to be seen whether the company with the three-pointed star logo will use it or it will only be installed in Renault models. A larger “M260” gasoline mill with 1.6- and 2.0-liter displacements is also in the offing and in its highest state of tune will benefit from mild hybrid tech.

Sources close to Mercedes’ R&D center in Sindelfingen cited by Autocar have said a turbodiesel 2.0-liter “OM654” will be available with three outputs, along with a hybridized powertrain using an electrified version of the aforementioned 1.4-liter gasoline unit. The plug-in hybrid will make use of a nine-speed, dual-clutch automatic transmission and will have enough battery juice for an electric range of 31 miles (50 kilometers).

The A-Class family will be completed with two A45 members, one with over 400 horsepower and the other – dubbed “Predator” – with even more punch thanks to a hybridized powertrain set to arrive towards the end of the decade.