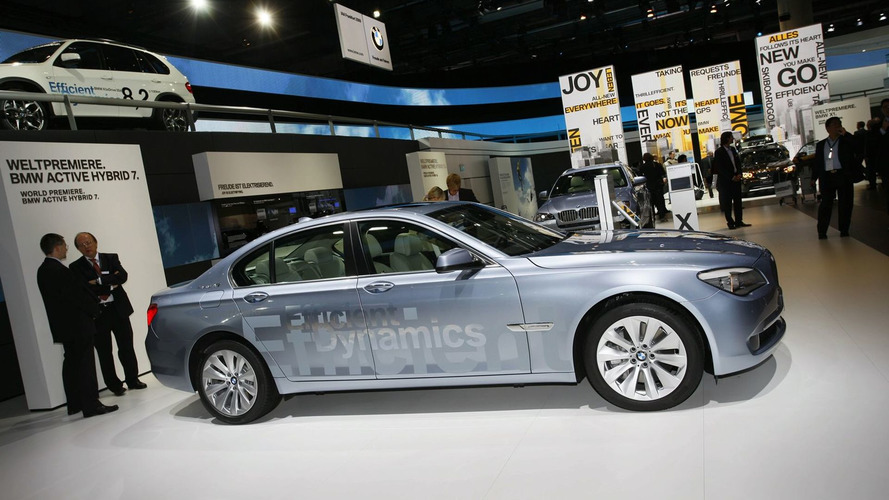 The BMW ActiveHybrid 7 Series and the Active Hybrid X6 have been unveiled at the 2009 IAA. Watch the video as the presentation is made.

BMW's first hybrid motor cars made a green entrance to their exhibition hall at Frankfurt. The ActiveHybrid X6 and the ActiveHybrid 7 Series are claimed by their manufacturer to be the sportiest hybrids to go on the market today.

Built around a similar powertrain but with different approaches and results the two cannot be said to be twins. The ActiveHybrid X6 has a 4.4-litre twin turbo V8 petrol plus two synchronous electric motors as sources of power. Total system output is 353kW (480hp) and 780Nm, while average C02 emissions are 231 g/km. The average fuel consumption is about 20% less than the equivalent petrol-only powered V8. The vehicle can also travel for up to 2.6km (1.6 miles) at 60km/h (37mph) on electric power alone.

The ActiveHybrid 7 Series on the other hand has the same 4.4-litre petrol V8 under its bonnet, coupled with a three-phase synchronous electric motor. But this time the system output is a detuned 335kW (455hp) and peak torque of 700Nm. It comes with the new 8-speed automatic transmission and is said to be capable of going from 0 - 60mph in 4.8 seconds. Its fuel efficiency is up 15% on an equivalent V8-only model.

Both these cars are fitted with batteries but not the same ones. The X6 has a 2.4 kWh NiMH battery pack that is rechargeable using brake energy regeneration and the 7 Series uses the latest lithium-ion technology.