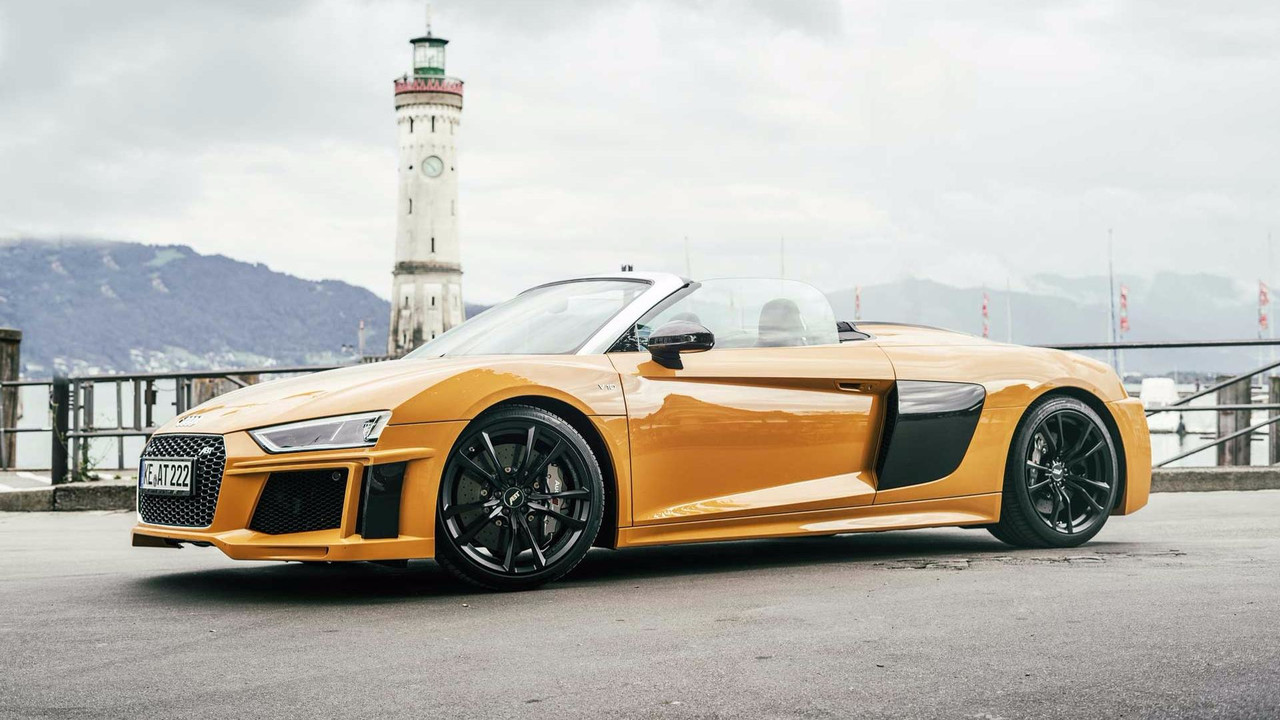 ABT promises Plus power at a lower price point, though exterior and suspension modifications are extra.

The latest Audi R8 treatment from ABT Sportsline is aimed at the base model – that is, if you can call a 5.2-liter, 540 horsepower V10 a base engine. Never the less, ABT now offers a power package for the less-endowed V10 which adds 70 hp to the mix, giving the base R8 performance similar to the Plus model at a lower price point.

The tuner doesn’t mention specific additions and changes made to pull that additional 70 ponies, outside of “optimizing the motor management.” To help visually set the R8 apart from the pack, ABT also adds a set of forged black 19-inch alloy ER-F wheels, or optional 20-inch GR rims.

For buyers who just want the additional punch, ABT is happy to stop there and send you on your way with a total of 610 horsepower. There are numerous other R8 upgrades available, however, starting with a pair of body kits labeled Street and Race that both add a variety of aero tweaks including a front skirt, new rear panel and a rear skirt, and a new stainless steel exhaust system that’s good for another 20 hp.

The Race kit adds blades up front and on the side as well as wheelhouse vents, all while shaving 110 pounds from the car. To better handle the extra power, ABT also offers upgraded suspension in the form of height-adjustable springs with sport stabilizer bars.

ABT offers these upgrades for both the coupe and Spyder models, though once you move past the power upgrade expect the costs to sail past what you’d pay for a proper Plus model. Considering the delectably aggressive treatment ABT’s exterior tweaks add to the car, shelling out a bit more coin for a sizzling R8 fast may not be such a bad thing.

The mid-engine sports car R8 by Audi represents the top level of performance. But with ABT Power, the ABT Sportsline vehicle tuners are still able to draw additional 70 horsepower out of the 5.2-liter V10. Now, the super sports car is even a more attractively priced competitor to the more powerful R8 V10 plus. After optimizing the motor management, the ABT Audi R8 based on the standard model now also puts forward 610 HP (449 kW) at 560 Nm.

The 10-cylinder gasoline engine of the Audi R8 already produces considerable 540 HP (397 kW) ex works, and accelerates the vehicle from 0 to 100 km/h in just 3.5 seconds. Since the R8 V10 and the plus model basically share the same engine, the “small one” now can develop its full potential and drops all limitations with the help of ABT Sportsline. From now on, 610 HP (449 kW) are available, which prove especially effective combined with the height-adjustable ABT suspension springs and the ABT sports stabilizer bars.

Optionally, ABT Sportsline offers two different body kits for the R8 Coupé. The “STREET” and “RACE” versions come with an additional performance optimization: Airflow adjustment and a special TÜV-approved stainless steel exhaust system with carbon double tailpipe trims provide the super sports car with another 20 HP. In addition, it is also equipped with a front skirt including panels made of visible carbon fiber, a rear panel, a rear skirt including a rear muffler, and a sport catalyst. The “RACE” body kit additionally comprises a front lip including blades, side blades made of visible carbon fiber, and wheelhouse ventilations which, to some extent, also consist of visible carbon fiber. Thus, up to 50 kg of weight can be saved, which additionally increases the performance.

“The ABT Audi R8 is the ultimate sports car,” enthuses Hans-Jürgen Abt. “It reflects our philosophy down to the smallest detail. And it speaks clearly, from technology to interior to exterior: no compromises!”