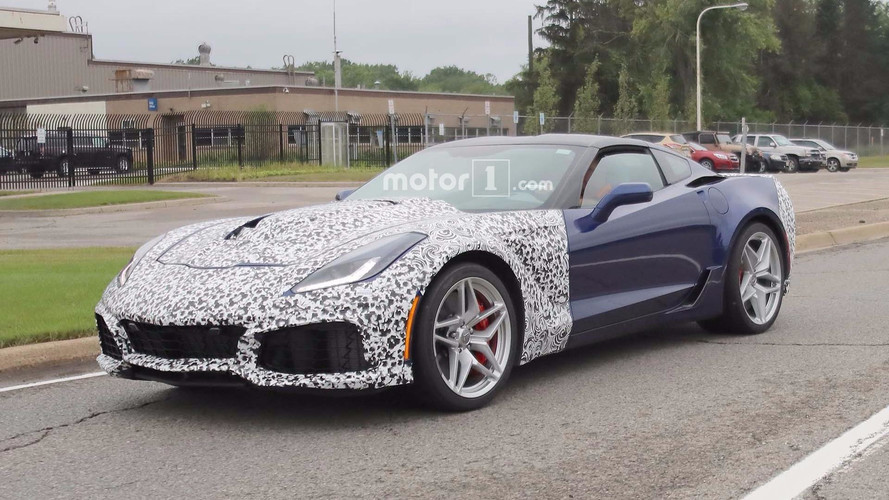 It won’t be long before we have full disclosure on the newest king-of-the-hill Corvette, the next ZR1. Our spy photographers nabbed these mostly uncovered shots at GM’s Milford Proving Grounds about 50 miles northeast of Detroit, and it appears to be a near-production vehicle. The ZR1 front fascia obviously offers up a larger grille area, though from what we can see on the rest of the car it may not have quite the same visual punch as the Z06.

Of course, the sizzling question right now revolves around what might be lurking under the hood. There are two possibilities, neither of which we’ve been able to confirm. We start with the familiar LT4 V8 that currently resides in the Z06, belting out 650 supercharged horsepower from its 6.2 liters of displacement. In the track-focused Z06 body, that’s enough to push the car to 60 miles per hour in under three seconds. The ZR1 would certainly offer more power, which could be accomplished simply by dialing up the boost. Of the two options, it’s the more straightforward approach.

The other option is far more interesting, and could even serve as a bridge between the front-engine C7 model and the forthcoming mid-engine C8 Corvette. We’re speaking of course about the LT5 V8 – an all-new 6.2-liter mill that trades the single cam-in-block design for a set of DOHC heads. That would certainly be one hell of a swan song for the C7 Corvette, and it would pay homage to the 1990 - 1995 Corvette ZR-1 – the only other Corvette to ever feature a DOHC engine. We know this engine is coming, it’s just a question of when.

Regardless of the mill, the ZR1 is expected to have a new 10-speed automatic developed jointly with Ford. There’s no word if a manual will be offered as well; the many spy videos we’ve seen of the ZR1 certainly suggest it will be automatic only with some kind of manual mode available.

We’re expecting Chevrolet to formally introduce the new ZR1 later this year with production beginning in 2018.