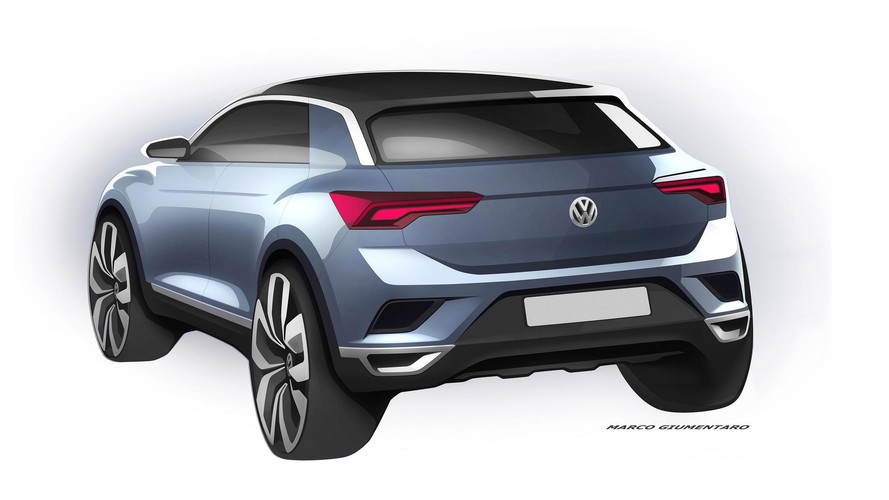 Less than 20 days before the official premiere of Volkswagen’s T-Roc compact crossover, the German brand has released two new teaser images, this time giving us a complete look at the car. It won’t be long until we see it in person, as the first public appearance is scheduled for the Frankfurt Motor Show in September this year.

Volkswagen is still tight-lipped about the T-Roc and only says it will debut a new “surprising progressive design” for the brand. The two sketches, together with previous partial images, reveal that it will be a funky small crossover, rivaling the Nissan Juke and the likes.

Think of it as the Polo of crossovers – considerably smaller than the Tiguan, taking the entry-level position in the company’s current crossover lineup. Based on the flexible MQB platform, the vehicle will borrow most of its hardware from the Polo and Golf, which means a wide range of turbocharged gasoline and diesel engines, mated to either a manual gearbox or a DSG automatic transmission, will be available.

According to different sources, the T-Roc might receive a hot R version, powered by a 2.0-liter turbo gas engine. This is the same unit that powers the Golf R facelift and delivers 310 horsepower (228 kilowatts) and 295 pound-feet (400 Newton-meters) of torque. Interestingly, the T-Roc could also become the brand’s first-ever model to feature a 48-volt mild-hybrid system.

As far as the interior is concerned, expect to see familiar layout and an all-digital instrument cluster, similar to the one in the Golf.

The model is set to enter production phase in late August or early September, which means first deliveries in Europe will be completed by the year’s end. Volkswagen plans to sell the T-Roc in the United States too, but this won’t happen, most likely, before 2019.