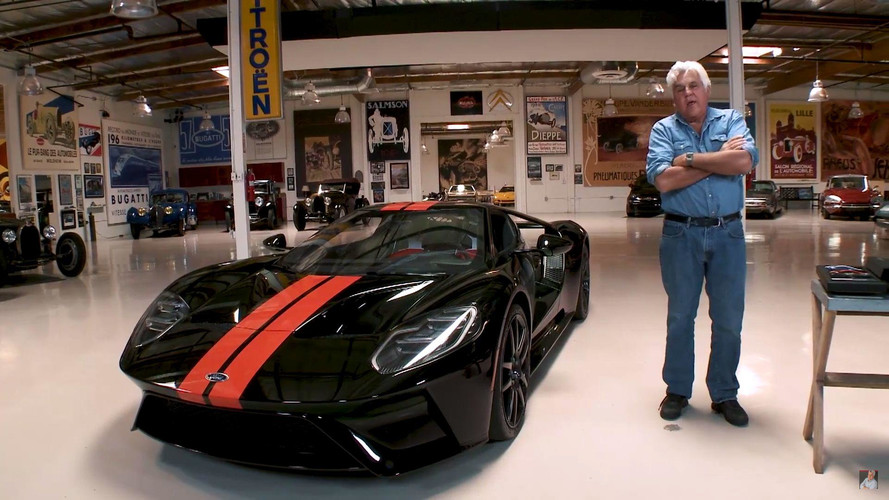 Leno didn't pick many options, but they weren't cheap.

Jay Leno recently showed off his newly delivered 2017 Ford GT, and during the video, he briefly held up a paper displaying the supercar’s VIN. An eagle-eyed Reddit user typed the number into a Ford window sticker lookup tool, and it revealed the exact specification of Leno’s car, including that it has $55,000 in options. In total, GT cost him $505,750, which included the $3,000 gas guzzler tax and $3,750 for destination.

Despite having options that cost as much as a lightly equipped F-150 Raptor, there’s not much extra on Leno’s car. His GT features the 20-inch carbon-fiber wheels with a gloss finish, which cost $15,000. The titanium lug nuts are an extra $1,000, and the orange brake calipers are another $1,000. Leno’s supercar features a black body with orange stripes, and it turns out these accents add $10,000 to the price. The only other extra equipment on the comedian’s GT is Equipment Group 400A, which costs a hefty $25,000. We have reached out to Ford about the exact contents of this package.

In his video, Leno touted that he saved $10,000 by not getting the optional titanium exhaust. His GT also doesn’t have the Competition Series package that includes a Perspex acrylic engine cover, a carbon-fiber prop for keeping the trunk open, and thinner Gorilla Glass. Aesthetically, this option includes carbon-fiber trim for the hood stripes, mirror caps, and lower body trim. The titanium components for the lug nuts and exhaust are standard on the Competition Series models.

Based on what Leno says in his video, this window sticker appears to accurately describe his GT. As further evidence, the serial number is HH200012, which indicates this is the 12th example out of Multimatic’s fantastic workshop. Leno wanted car twelve because his 2005 GT was also the number 12 off the assembly line.