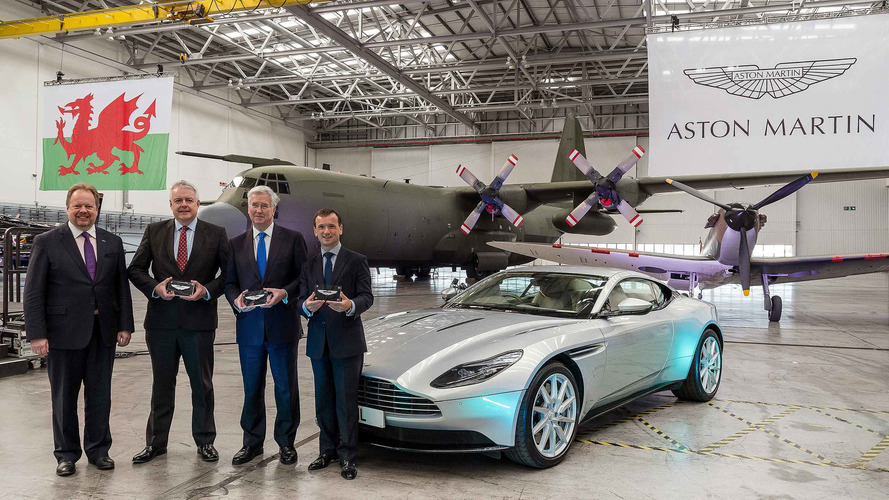 The DBX will begin construction there in 2019.

Aston Martin now moves into phase 2 construction of converting the former Royal Air Force base in St. Athan, Wales, into the automaker’s new manufacturing center for upcoming vehicles like the DBX crossover. The company will use three of the super hangars there as its massive factory with the capability of building 7,000 vehicles a year.

“This is yet another step on our journey in Wales, with the facility now starting to take shape,” Aston Martin President and CEO Andy Palmer said.

The new factory will cost the automaker around $280 million (200 million pounds), and the plant will initially add 750 employees to Aston Martin’s ranks. The company already hired over 40 people, and they have started training at the existing factory in Gaydon, Warwickshire, England.

Aston Martin will start building the DBX crossover there in 2019. Two undisclosed luxury models for the Lagonda brand will enter production there in 2020 and 2021. They will allegedly be a posh crossover and an opulent sedan.

Motor1 UK was at the St. Athan site when the conversion work began in April. Aston Martin confirmed that the factory included facilities for building electrified vehicles, pointing to hybrids and possibly EVs from the company in the future.

“Due to its sheer size and scale, the St. Athan Super Hangars represented an excellent opportunity for us to build our second manufacturing facility, within the envelope of an existing structure,” Palmer said at the site's handover earlier in the year.

Aston Martin’s existing factory in Gaydon will continue to focus on the brand’s sports cars like the current DB11 and forthcoming Vantage, which the company will unveil before the end of the year.

This contract was formally advertised through the Welsh Government’s Sell 2 Wales site, receiving significant interest from firms across the UK.  But it was the local Ammanford based TRJ who were ultimately successful, following on from their award of Phase 1 in December 2016.

Work is already underway at St Athan and will focus on turning the three ‘Super Hangars’ into an Aston Martin manufacturing facility.

Aston Martin President and CEO Andy Palmer commented: “This is yet another step on our journey in Wales, with the facility now starting to take shape. TRJ have proven themselves during ‘Phase 1’ and we look forward to working with them over the course of this next phase of the project.”

In February 2016, Aston Martin announced that it had chosen St Athan from 20 potential global locations as its second manufacturing facility. A recruitment drive last year began the search for up to 750 new employees who will work at the facility. Over 40 employees who will work at St Athan have already been hired and are working and training at the company’s manufacturing facility in Gaydon, Warwickshire

First Minister of Wales, Carwyn Jones said: “Our decision to open our Sell to Wales procurement channel to Aston Martin was designed to ensure that businesses right across Wales feel the benefit of the company’s decision to locate here.

“I am so pleased that Ammanford based firm TRJ have been successful in winning the contract for the next phase of construction of Aston Martin’s manufacturing facility at St Athan. This is exactly the sort of outcome we had hoped for and I look forward to seeing more Welsh businesses benefitting in the coming months.”