2018 Porsche Macan Facelift Photographed Inside And Out

The center console still features a plethora of buttons around the gear lever.

With the Macan being unveiled roughly four years ago, it shouldn’t come as a big surprise Porsche is currently putting the finishing touches on a slightly refreshed version of its sporty crossover. The folks from Stuttgart were testing the Turbo version if we were to rely on the angular shape of the blacked-out quad exhaust tips, but one can never be too sure when dealing with prototypes.

Considering there’s not much camouflage, it likely means the changes on the outside are going to be on a rather subtle level. Only the headlights and taillights remain partially hidden underneath a semi-transparent foil, but even so we can check out most of the changes in tow for the Macan’s mid-cycle refresh. As it’s the case with facelifts, the lighting clusters will retain the same shape, but with modified graphics. 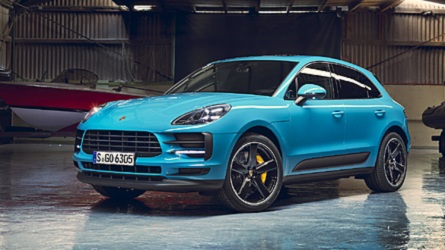 The side air vents flanking the grille appear to be a tad different than those of the current Macan Turbo and have those two horizontal fins sitting closer to one another while the lower lights seem to be missing. The biggest secret could be at the back where the taillights might be interconnected through a light bar as wide as the tailgate. The black tape does a great job at concealing the real design, which has already been implemented in the latest Panamera and will also be seen in the next-generation 911.

There’s not much to say about the interior as it’s still packed with a ton of physical buttons on the center console. While the layout might be getting a bit long in the tooth, some will appreciate that most of the functions are going to be available at only the press of a button away. Obviously, it will take some time to learn the location of each and every button.

Details are scarce about whether there will be any updates underneath the hood, but Porsche’s engineers could manage to squeeze a bit more horsepower from some of the engines. Don’t hold your breath for a more track-focused version as the company has made it clear its SUVs won’t receive the GT treatment.

The mildly updated Macan could debut as early as next month at the Frankfurt Motor Show.