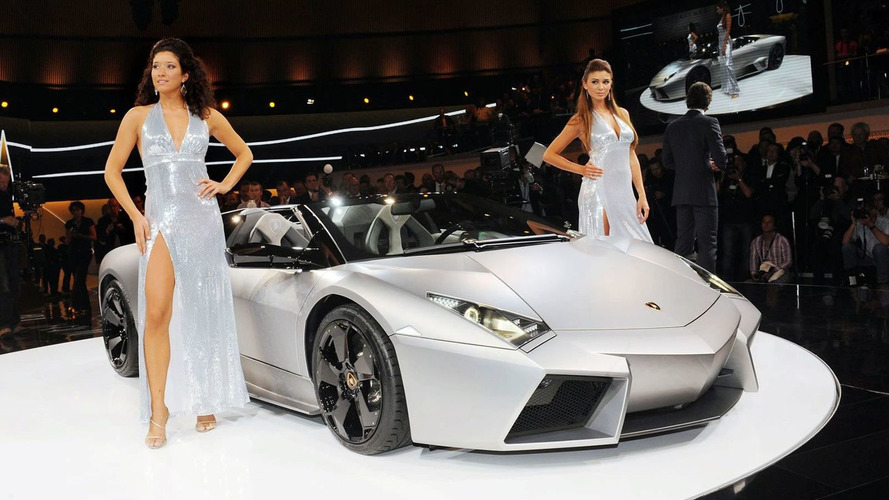 Official pictures and details of the Lamborghini Reventon Roadster have been released. The 670hp topless Italian does 0 - 100km/h in 3.4 seconds and takes its sharp wedge looks from fighter jets.

Built mainly from carbon fibre and high-strength steel the Reventón Roadster displays good rigidity and at the same time is light enough to kick out exceptional performance. It weighs 1,690kg (3,725 lbs) or just 25kg (55 lbs) more than the Coupé.

Inspiring the car's design was the fighter jet with styling elements such as the powerful arrowhead look at the front, the scissor doors, broad side skirts and large air intakes. The headlights feature bi-xenon technology while LEDs are used for daytime running lights, indicators and the rear lights. Exterior paintwork is a special matt colour called Reventón Grey.

The dimensions are 4.7m long, 2.1m wide, 1.1m high and the wheelbase is 2.7m. Both passengers sit pretty close to the ground but fortunately the suspension can be raised by 40mm at the front to ease ingress into steeper everyday obstacles.

Providing the power is Lambo's tried and tested 6.5-litre 48-valve naturally aspirated V12 worth a massive 493kW (670hp) at a howling 8,000rpm. Its maximum torque figure is 660Nm (487 lb-ft) which is achieved at 6,000rpm. Lamborghini says it will rush away from standstill to 100km/h in 3.4 seconds and not stop accelerating until the dashboard displays 330km/h (205mph). Torque is transferred to all four wheels in varying doses thanks to the Viscous Traction permanent all-wheel drive system.

The interior is a mix of fighter jet, F1 and comfort. Instrumentation is no longer just classic analogue but is also delivered via two transreflective and one transmissive LCDs. The driver can switch between analogue and digital view at any time. Carbon fibre also makes its way into the dashboard and is fused with aluminium instruments while other materials like aluminum, Alcantara and leather are utilised as well.

Each Lamborghini Reventón Roadster will be priced at €1.1 million (US$1.6 million) - excluding tax - when it goes on sale next month.