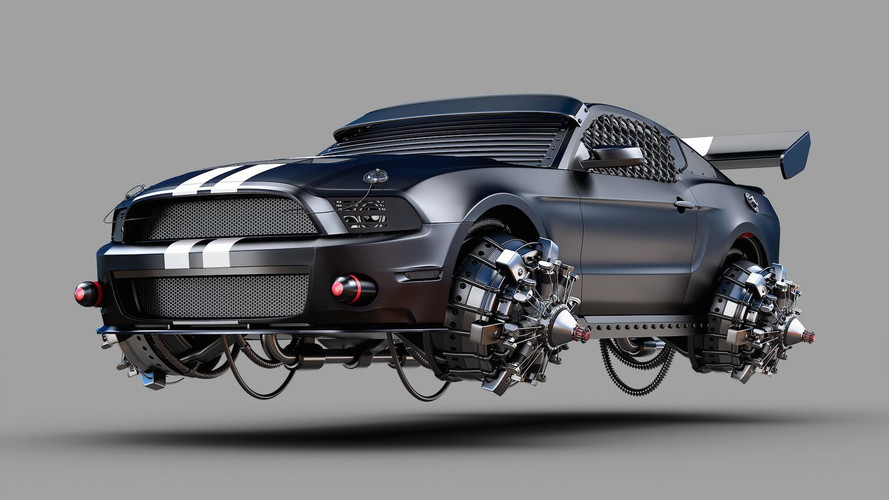 Designer Jomar Machado has created more than 60 concepts for the air and the road.

Unfortunately we don’t live in the hovercar-filled future that cartoons like The Jetsons had promised, but that doesn’t mean we can’t imagine one via renderings. Graphic designer and 3D artist Jomar Machado has digitally dreamt up an entire range of futuristic hover vehicles, everything from a badass Bugatti with machine guns, to a Mustang with missile launchers, all of them seemingly out of some post-apocalyptic dream sequence.

In total, Machado has come up with more than 60 renderings of vehicles for both the air and the ground, many of them based on current production vehicles. Take a look at five of our favorite hovercar concepts below, as well as a gallery filled with all of the 65 renderings.

First up is the most expensive offering (at least in the real world) of the bunch: a Bugatti. The body of the outgoing Veyron has been repurposed as a flying supercar, complete with four guns located on the front bumper, metal siding on the windshield and windows, and a set of dramatic intake vents on the roof. It looks like something you’d find in a Mad Max movie set in the year 3741.

Another especially intriguing concept is this flying Ford Mustang, which uses the outgoing version of the pony car as its base. Like the Bugatti, the wheels have been swapped out in place of high-tech hover machinery, while the windshield and windows have been covered with high-strength metal siding. Missile launchers have been installed in place of fog lights, of course, and a giant rear wing assuringly helps with aerodynamic properties while flying through a desert wasteland.

The 356 may be a classic… but this is no ordinary Porsche. Gone are the wheels, in place is the same hover technology found on the two previous renderings. Three missiles are located on the door panel, and some dramatic cladding was added to the front bumper along with a single gun just underneath the left headlight. Meshed metal replaces the windshield for added protection from debris and gunfire.

When standard Formula 1 racing is long gone, Machado imagines the leftover product will be something similar to the concept pictured here. Equipped with hovering technology, racers have hung up their steering wheels in place of missile launchers; two are located on either side of the vehicle, with a single machine gun jutting out from the nose. Added guns in the rear and a massive rear wing finish off the package.

The classic Chevy body has been repurposed in the form of a battle-ready hovercar. Two missiles are located in the grille, two machine guns have been installed on the hood, and some extra metal shielding has been added to the side panels, hood, and roof. Definitely a unique take on an American classic.

Together with the five listed above, a hover-version of the Lexus 2054 concept from the movie Minority Report, a battle-ready van, and an old Mercury are among the other unique renderings seen here. A number of single-seat options based on modern motorcycles are also included in the project, as well as a few hot rods, and even a vehicle that looks like a flying jet ski. Overall the concepts are striking, and undoubtedly unique.

A freelance designer since 2005, Machado's work has been featured around the world. Previously he worked for the ad agency JWThompson, where he spent 17 years in their office at Rio de Janeiro, Brazil, and was one of the first designers to join their Computer Arts Department in 1994. Today he's cranking out concepts like this.