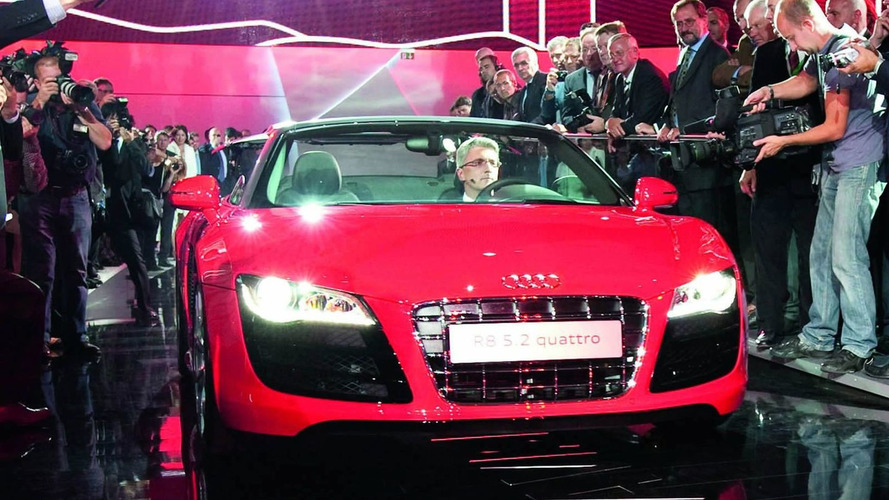 To enable the Spyder to hit these kinds of speeds, the car had to be constructed as light as possible. Despite the extra chassis reinforcements to compensate for the lack of fixed roof, the aluminum Audi Space Frame (ASF) only weighs 216 kilograms (476.2 lb) which is only 6 kilograms (13.23 lb) heavier than the one used on the R8 Coupe. In total, the manual equipped R8 Spyder 5.2 FSI quattro weighs 1,720 kilograms (3,791.95 lb).

In terms of styling, the Spyder looks pretty much as expected. The only small caveat is the carbon fiber rear hatch has two aggressive-looking arched cowls which act as integrated air vents. Other design tweaks include black front end accents, a chrome grille, and full-LED headlights. With the lack of a fixed roof, Audi replaced the trademark 'sideblades' with carbon fiber side panels.

Speaking of the roof, Audi decided to use a traditional cloth top (available in three colors) because it only weighs 30 kilograms (66.14 lb). Electrohydraulically operated, the top can be raised or lowered in about 19 seconds while the car travels at speeds up to 50 km/h (31.07 mph). To further maximize convenience, the rear window is separate from the top which allows it to be raised independently of the roof.

Inside, the roadster is awash with premium materials and elegant design. Goodies include Nappa leather upholstery, a Bang & Olufsen audio system, GPS navigation, and heated seats. If you forget to put the top up on a hot summer day, the seats will be cooler than normal because they use special "pigments that reflect the infrared component of sunlight." Should that fail to impress you, Audi also offers exclusive leather packages, special interior trim, and seatbelt microphones for the hands-free telephone communications system.

Audi will begin accepting orders for the R8 Spyder shortly, with the first German deliveries expected to occur in early 2010.