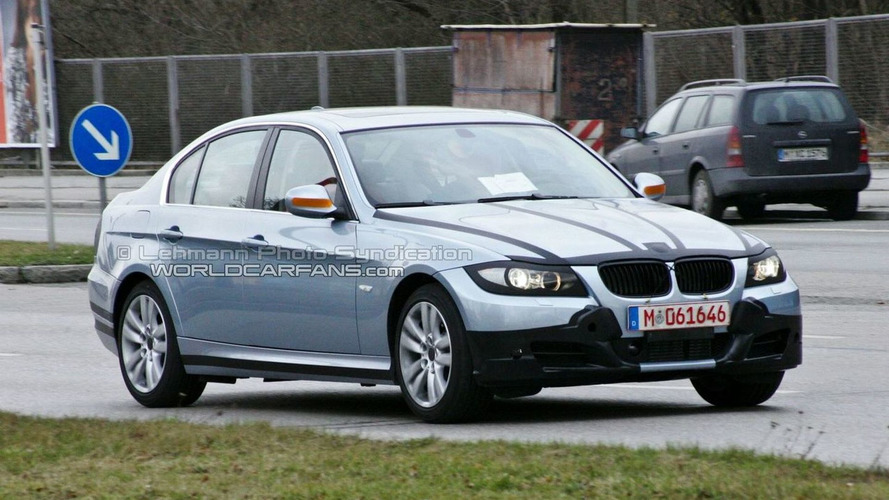 These are without doubt yet the most revealing pictures of the upcoming BMW E90 3-series sedan facelift, slated to hit showrooms this summer.

These are without doubt yet the most revealing pictures of the upcoming BMW E90 3-series sedan facelift, slated to hit showrooms this summer. Since its launch at the Geneva Motor Show in 2005, the E90 racked up sales of 96,000 units in its first production year, in the U.S. alone. Now the 3-series is entering its fourth year of production and these pictures reveal just how BMW plans to boost the 3-series' appeal to make it a menacing competitor against Mercedes' C-class and Audi's recently launched A4 sedan.

Following earlier winter testing spy pictures, our photographers caught this silver-bluish E90 with a disguised front bumper and camouflaged head- and tail lights cruising along the streets of Munich. Based on these pictures the most apparent changes appear to be a new rear end with LED taillights, a new front fascia with a newly shaped engine hood and grille as well as new side mirrors. In line with BMW's current headlight design, expect to see accentuated "angel eyes" along with a revamped interior as well as an assortment of new even more environmentally friendly engines.

In September we rattled on about the possibility of BMW fitting its groundbreaking 2.0-litre turbocharged 204 bhp diesel engine, currently sitting in the 123d, in the E90 sedan and E91 touring range. Our sources say a 323d will be available in 2009. BMW's recently launched DKG (Doppelkupplungsgetriebe) double clutch gearbox is also likely to be featured as an option in the reworked 3-series product range.