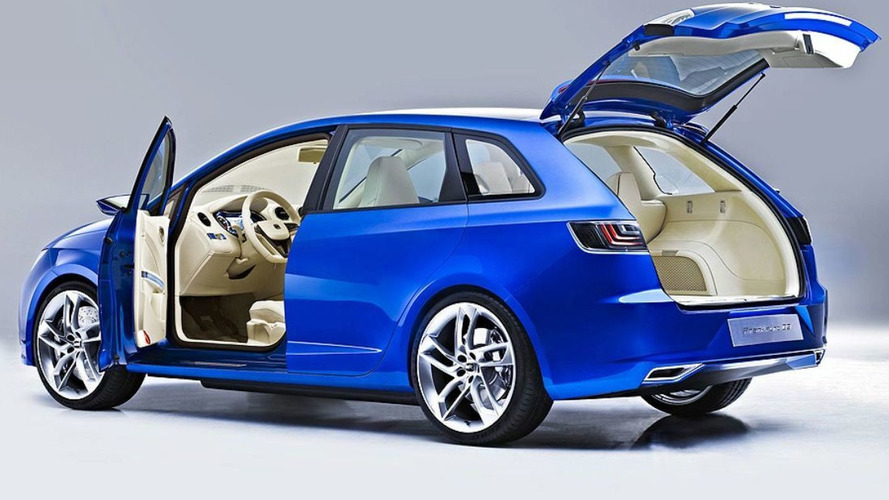 This is the SEAT IBZ concept, the model which should eventually lead to next year's SEAT Ibiza Sport Tourer.

The embargo has broken on Spanish car brand SEAT's Frankfurt debut, the Seat IBZ concept.  This concept is expected as being very near-production, with the showroom version Seat Ibiza Sport Tourer taking the stage either at Geneva or Barcelona within the next eight months.

When laying out Seat's plans for the future, company president Erich Schmitt spoke of the Sport Tourer as being one of ten new models hitting the market over the coming months and years.  The Volkswagen-owned brand has struggled to grasp a significant share of the marketplace, but the Sport Tourer may be the catalyst the company needs.

Appearing to have more cabin space than the rest of the Ibiza lineup, the IBZ manages to keep from looking bloated.  Instead, it looks like a car that is comfortable for a daily commute, spacious enough for the family, and still looks good as a set of wheels for the holidays.  Size was kept manageable because width and height were not extended compared to the Ibiza, although the length comes in at 4.22 meters.  The double-paned moonroof makes the car seem as though it is even less confining.  Combining an off-white, leather interior, with blue lighting, the IBZ has a very relaxed feel.

At the front, the IBZ has distinct relations with Seat's current stable of vehicles.  At the same time, it does a nice job of getting an update, utilizing both LED lighting and a honeycomb grille.  LEDs are also used at the back, where they make up the entire set of lighting.  We also find a split, dual-exhaust at the rear, which looks nicer than had the two pipes been coupled together.  Although new side mirrors are a bit more streamlined, do not expect the unusually-shaped pieces to make the final product.

The engine on the production vehicle is rumored to be a 1.4-liter TFSI engine from Volkswagen.  Twin-chargers help produce 180 horsepower, and up to 250 Nm of torque.  A detuned 160 hp unit appears on the VW Golf.

Seat does confirm that the car will come to market sometime in 2010.  You can read more about the Seat IBZ Concept in the press release below.