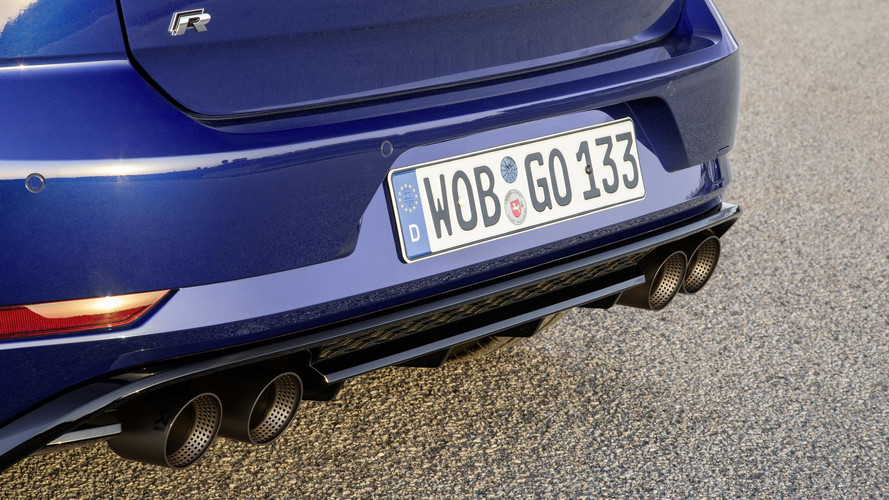 The titanium exhaust system is also considerably lighter than the standard setup.

VW quietly introduced an optional Performance Pack for the Golf R facelift earlier this year at the Geneva Motor Show and now it’s finally ready to talk about it. Developed by Akrapovič, the titanium exhaust system shaves off 7 kilograms (15.4 pounds) and at the same time gives the all-wheel-drive performance hatchback a better soundtrack. The exhaust’s note can be altered by changing the driving mode and it sounds the best whenever hitting those high engine revs or going through the gears.

The performance pack also encompasses an uprated brake system that weighs 2 kg (4.4 lbs) less than the Golf R’s standard setup and features an aluminum brake pot teamed up with a cast steel friction ring using cast pins. Not only is it lighter, but it expands radially when heated and has a very precise metering. Moreover, the front axle’s brake pads have been specially developed to provide superior stopping power. The optional brakes can be visually distinguished thanks to the silver logo plate adorned with “R” lettering on the calipers.

VW mentions Golf R customers can also get these goodies separately and have the option to order semi-slick tires to achieve better lap times during those track days. At an additional cost, the folks from Wolfsburg can also throw in a few aerodynamic tweaks, such as the air curtains in the front bumper, reshaped side skirts, and an optimized rear diffuser derived from race cars. Lastly, there’s also a roof-mounted spoiler increasing downforce by 20 kg (44 lbs).

These performance add-ons are not accompanied by a power boost as the European version of the Golf R hatchback and wagon still has 310 hp (228 kW) coming from its familiar 2.0-liter TSI engine. VW toyed around with the idea of doing an R400/R420, but the project was ultimately axed.

Golf R and Golf R Variant provide with 228 kW / 310 PS the power and dynamic handling of sports cars. Their tuning can optionally be further enhanced via exclusive 'Performance' packs. These include 'Performance' disc brakes and semi-slicks for driving on the track. Also specially designed for the two- and four-door Golf R is a 'Performance' exhaust system. The 'Performance' options thus offer the finest motorsport technologies – for the track and for everyday motoring.

R-'Performance' titanium exhaust system. Igor Akrapovič of Slovenia was actually a racing car driver. But one day he hung up his racing helmet and began to develop exhaust systems – sports exhaust systems. They are so impressive that Volkswagen worked with Akrapovič to design a 'Performance' exhaust system made of titanium for the two- and four-door Golf R. The use of the noble metal reduces the weight compared to the standard system by seven kilos. The 'Performance' system gives the Golf R completely new acoustics, which extend, depending on driving mode, all the way to that of motorsport. Especially at high revs and when shifting gears, a sound is generated that is typical of Akrapovič systems – tight, finely tuned and yet not too loud.

R-'Performance' brake system. Available for the Golf R and Golf R Variant are 'Performance' disc brakes. The brake system is two kilos lighter than the standard brakes and thereby reduces unsprung masses. Even on the racetrack the system is extremely stable. The front brake discs are what are known as 'built pin discs'. In this construction, the brake pot is made of aluminium, while the friction ring (the classic 'disc') is cast steel and is joined to this aluminium brake pot by cast pins. This allows it to expand radially when heated. Other benefits of the brake system include its very precise metering. Special brake pads on the front axle perfect the hot braking response. Visually the system is identifiable by the silver logo plate with R-lettering on the brake calipers.