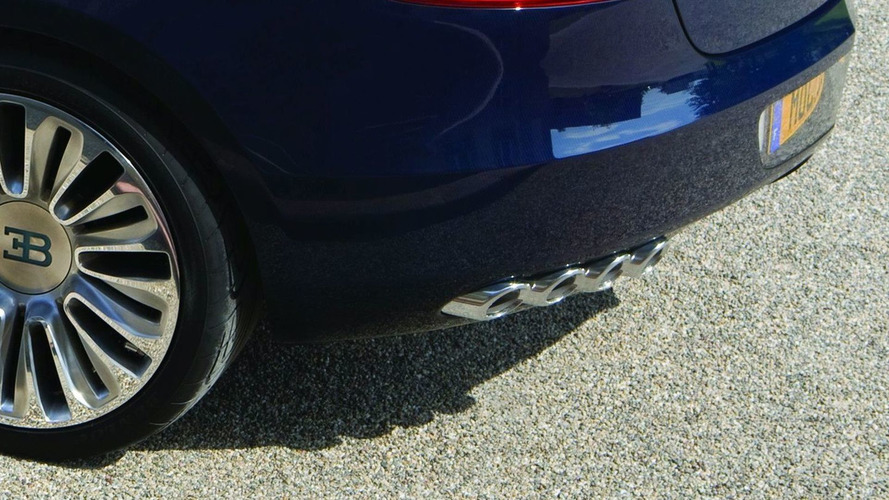 Bad news first. The all-new Bugatti 16 C Galibier Concept car is not for Frankfurt consumption. Sorry. But it will be officially revealed at an exclusive event in the next few hours. Good news is that we have some details on what Bugatti CEO Franz-Josef Paefgen describes as "most exclusive, elegant and most powerful sedan in the world."

Power comes from the works 8-litre 16-cylinder motor with two-stage supercharging. It can churn out between 588kW (800hp) and 735kW (1,000hp), all of which is channeled to all four wheels using the AWD system. Standard fuel is petrol but ethanol can be used as an alternative. To stop it running away from the driver is a set of powerful carbon ceramic brakes.

True to the teaser images that were flashed recently the rear features four exhaust tailpipes on either side while the rear window is integrated with the third brake light which runs vertically from the roof down. The wings and the side doors are made of polished aluminium and the rest of the body is built on dark blue hand-made carbon fiber reinforced plastic (CFRP). Large LED headlights flank the imposing Bugatti radiator grille.

The interior is characterised by the flowing surfboard-shaped dashboard made of fine wood and leather. The centre console features a large LCD screen while the speedometer has been deliberately placed in the middle of the dash so rear passengers can see just how fast they are moving. A very stylish feature is the Parmigiani removable Reverso Tourbillon Swiss clock which can be worn on the wrist through its cleverly-designed leather strap.

Previously a number of names were suggested for the 16 C Galibier, including Lydia and Bourdeaux. But Bugatti has chosen to name it after the classic 4-door Bugatti Type 57. Galibier is also one of the most difficult alpine passes along the Tour de France.