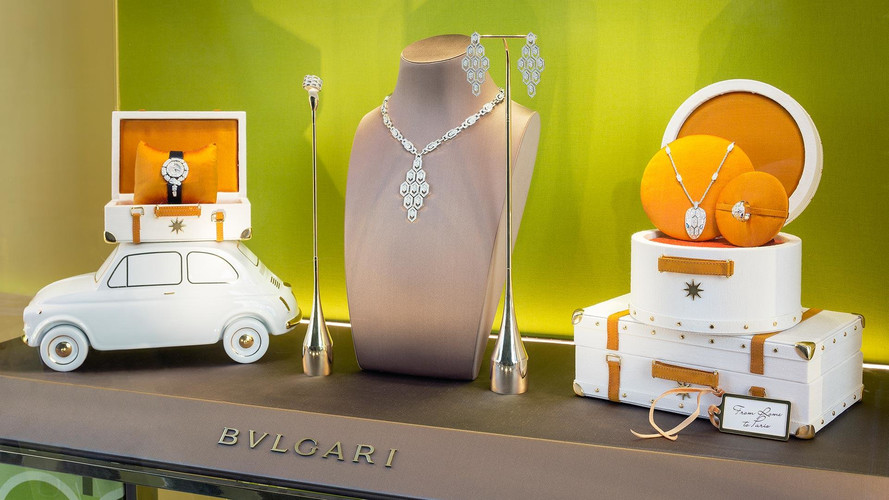 Vespa motor scooters will also be part of the campaign.

Jewelry company Bulgari helps to celebrate the Fiat 500 60th anniversary by letting the iconic model carry the company’s beautiful creations. There will be 1,600 examples of the iconic Italian models in the windows of the firm’s 300 boutiques around the world as part of its “Roman Holiday” creative campaign. Tiny Vespa motor scooters will also be part displays.

These white and gold models specifically depict the 1965-1972 Fiat 500F. This variant had the highest production run of any 500 variant.

The 500 celebrated its 60th anniversary on July 4 this year, and people around the world have been celebrating the model’s legacy. For example, New York’s Museum of Modern Art added a 1968 500F Berlina to the organization’s permanent collection alongside vehicles like a 1961 Jaguar E-Type and 1965 Porsche 911. In the 500’s Italian home, a limited-edition stamp depicted the little car. Fiat also commemorated the vehicle’s birthday with the Anniversario version of the current 500, and the additional equipment included retro touches like pastel body colors and vintage-style wheels.

The 500 was in production through various iterations from 1957 to 1975. In that time, Fiat built over 4 million of them. The company believes that 400,000 of them are still on the road today.

Today, the Fiat brand tried latch onto people's good feelings for its old models by building a lineup of retro-tinged models, but the move has started to falter in the United States. Despite lowering prices, 500 sales are down 4 percent through the first 6 six months of the year.

Fiat hasn't even found success in the booming crossover market. Its 500X has moved just 3,980 from January to June – a 40 percent dip from the same period last year. In comparison, the Jeep Renegade (on the same platform) had a volume of 53,027 units – 2 percent jump from in 2016.

BULGARI JEWELLERY TAKES A TRIP IN THE FIAT 500

1,600 miniatures of the Fiat 500F have been produced for 300 Bulgari boutiques worldwide
These cars will be carrying magnificent pieces of Bulgari jewellery as part of their “Roman Holiday” creative campaign
Fiat and Bulgari have entered into a prestigious partnership, which forms an integral part of Bulgari’s “Roman Holiday” creative campaign, expressing the exuberant spirit and ‘joie de vivre’ of the two all-Italian brands.

1,600 exquisite pottery scale miniatures of the historic Fiat 500F have been produced for the campaign and will adorn the windows of around 300 Bulgari boutiques worldwide. They will be carrying "passengers" of great distinction, in the form of magnificent items of Bulgari jewellery, symbolising the finest in Italian taste and style.

The little white and gold models are reproductions of the most popular Fiat 500 of all time, the F series, built from 1965 to 1972. On July 4th this year, this model's status as a work-of-art was formally recognised as it joined the permanent collection of the Museum of Modern Art, or MoMA, in New York. It was a homage to the iconic little Fiat 500, which celebrates its 60th birthday this year and is a symbol of Italian creativity, capable of inspiring artists and designers all around the world.

The 500 project fits perfectly into the “Roman Holiday” summer campaign, Bulgari's new creative inspired by the classic film starring Audrey Hepburn and Gregory Peck. With adverts constructed around colourful maps of Rome – home to both the most splendid cultural monuments and famous entertainment venues – it evokes the Eternal City's hedonistic spirit. The irresistible joie de vivre of these drawings, by the artist Lotta Nieminen, is well matched by the fun-loving, cheerful character of the Fiat 500, a global ambassador for Italy and emblem of mass car ownership.

The model Fiat 500s are accompanied by miniatures of another Italian symbol, the Vespa scooter.

Some of the objects produced by the creativity of post-war Italian industry, of which the 500 and the Vespa are fine examples, cannot be judged merely by their appearance. Revolutionary in their design and concept, they exert a special, magical appeal, redefining shared assumptions, and are key masterpieces of industrial history. The Fiat 500, may have shaped automotive history but it has never been merely a car — in its 60 years of history, it has entered the collective imagination and has become an industrial icon of immense artistic and cultural value.