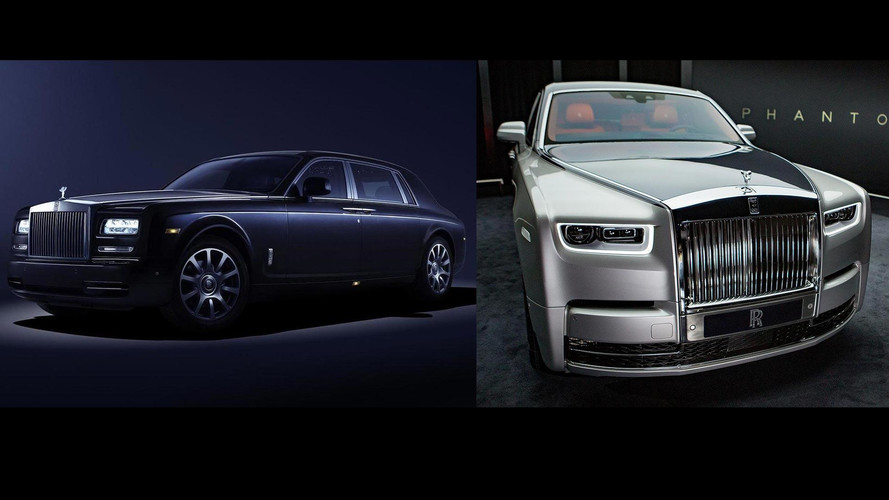 The Rolls-Royce Phantom is completely new for 2018, here's how it compares to the long-lived previous generation.

In the modern auto industry, most companies replace their models about every five years, but the previous generation of the Rolls-Royce Phantom can tout 13 years of production at the company’s Goodwood factory. With the introduction of the eighth-generation of Rolls’ range-topping vehicle, it’s the perfect time to examine the changes to the ultra-luxurious sedan.

The 2018 Phantom (left) looks much more modern than its predecessor (right), even this Series II facelifted version. The narrow, LED headlights are a particularly attractive upgrade, and give the big sedan a more angry appearance. Rolls doesn't like to call the firm's models sporty, but this is the best way to describe the new front fascia. The additional intakes and sliver-thin polished details provide an extra visual flourish that's absent from the last Phantom. A brighter finish for the massive grille makes it pop out more too.

When viewing them from the side, the two generations of Phantom look nearly identical. The new model's slightly shorter front overhang creates a stubbier nose, and a better integrated bumper gives it a smoother appearance. The latest Phantom's roofline appears to have a slightly steeper rake at the front and back, but the tweaks are minimal. A more curvaceous rump does wonders for the tail, though.

The latest Phantom has a sleeker, more rounded appearance at the back than the outgoing model. Rather than the hard-edged transition from the roof to the trunk before, the shape is much smoother now. It gives the Rolls a more aerodynamic appearance. Removing the character line down the shoulders cleans up the sedan's styling, too.

Rolls-Royce is famous for its interiors, and the new Phantom receives a thorough upgrade without revolutionizing the overall styling. The biggest news for drivers is the switch to digital gauges rather than the previous analog units (comparison below). The change gives the eighth-generation sedan a much more modern appearance. A new 12.3-inch infotainment display now extends across the dashboard and forces the company to move the HVAC vents lower on the center stack.

The back seat of a Phantom is ideally where you want to be, and Rolls-Royce doesn't change much back there for the new model. The company expects to work with its clients for creating the ultimate cabin, so two examples of the sedan could look very different inside. The company offers a massive array of options for the opulent surrounds like oil paintings, porcelain roses, and even a gold-plated, 3D-printed map of the owner’s DNA.

Rolls-Royce is somewhat coy about the powerplant in its range-topping model. The brand seems to see something vulgar in discussing horsepower and speed for a vehicle with such a focus on luxury. The 2018 Phantom has a new 6.75-liter biturbo V12 that pushes the output to 563 horsepower (420 kilowatts) and 664 pound-feet (900 Newton-meters) of torque – versus 453 hp (338 kW) and 531 lb-ft (720 Nm) from the previously naturally aspirated mill. The big sedan now needs 5.3 seconds to reach 62 miles per hour (100 kilometers per hour) instead of 5.9 seconds previously.

For a deeper look at the past and future Phantoms, check out the galleries below.