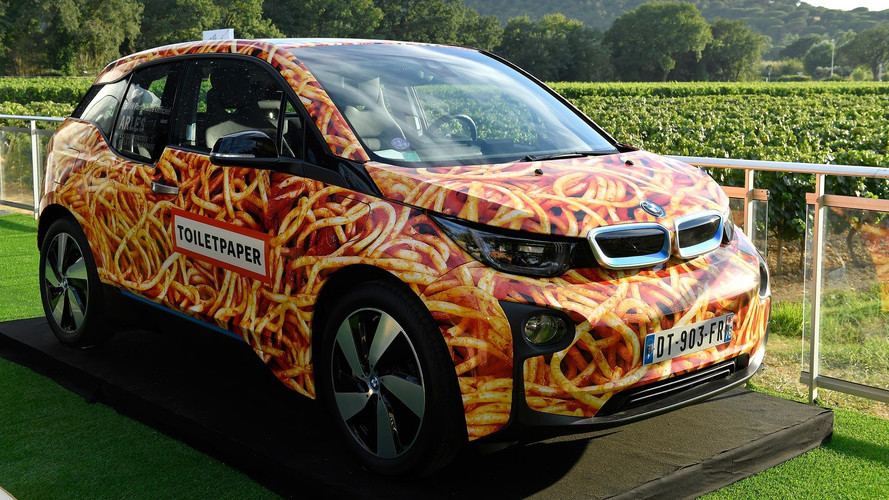 The new owner should drive this i3 as often as possible to confuse everyone else on the road.

The unique BMW i3 "Spaghetti Car" by artists Maurizio Cattelan and Pierpaolo Ferrari sold for 100,000 euros ($116,755 at current exchange rates) during a charity auction at the Leonardo DiCaprio Foundation’s Fourth Annual Saint-Tropez Gala. BMW reported that the bizarre electric vehicle went to a Swiss collector after “intense bidding,” and the sale included a certificate of authenticity signed by the creators.

Cattelan and Ferrari created the delicious-looking i3 for the Rencontres d’Arles Festival of Photography in 2016. In addition to covering the outside of the car with a close-up photo of skinny, the word Toiletpaper appears on each door. This is a reference to their "bi-annual avant-garde picture-based publication.” Upon debuting the car last year, Cattelan made the odd statement: “This is by far the best Spaghetti Car I have tasted! All those years of perfecting definitely paid off! Totally awesome!"

While the Spaghetti Car looks weird, it’s a fully functioning i3 underneath the bizarre body wrap. Seeing the bizarre EV on the road would be an incredibly weird sight.

BMW doesn’t consider the spaghetti-flavored i3 one of its official art cars. The company debuted the latest one of them earlier in 2017 when Cao Fei unveiled an M6 GT3 with colorful flourishes taking inspiration from traditional Chinese spiritual ceremonies. However, the bright streaks of color were only visible in augmented reality.

John Baldessari unveiled a more traditional M6 GTLM art car in late 2016. It featured “FAST” on the driver’s side and a picture of the car on the other. The white coupe featured a few bold uses of red, green, and yellow.

Saint-Tropez/Munich. On the occasion of Leonardo DiCaprio Foundation’s (LDF) Fourth Annual Saint-Tropez Gala, BMW France had the pleasure to donate a BMW i3, designed by Maurizio Cattelan and Pierpaolo Ferrari of TOILETPAPER, for the yearly fundraising auction. After some intense bidding, the unique artwork and fully functioning electric vehicle went to a Swiss collector for the amount of €100,000.

Vincent Salimon, CEO BMW Group France is delighted that “our commitments to sustainable development and support for contemporary creation come together to raise funds for the Leonardo DiCaprio Foundation. The BMW i3 "Spaghetti Car" was created by Maurizio Cattelan and Pierpaolo Ferrari on the initiative of BMW France and the Rencontres d'Arles, BMW partnered for 8 years. The donation of this unique work for the Foundation's annual charity gala in Saint-Tropez reflects once again the company's culture: daring, innovating, creating in complete freedom, in a responsible and sustainable spirit.”

The BMW i3 “Spaghetti Car” On the occasion of the Rencontres d’Arles Festival of Photography in 2016, Italian artist Maurizio Cattelan (*1960) created a BMW i3 (60 Ah) “rolling sculpture” together with the photographer Pierpaolo Ferrari (*1971). In 2009 Cattelan and Ferrari co-created TOILETPAPER, a bi-annual picture-based publication. For the exterior of the BMW i3, TOILETPAPER employed their signature style spaghetti close-up imagery. Cattelan remarked upon his work: “This is by far the best Spaghetti Car I have tasted! All those years of perfecting definitely paid off! Totally awesome!”

Maurizio Cattelan is considered one of the most significant artists of his time, with major exhibitions at international museums, including the Museum of Modern Art, the Centre Georges Pompidou as well as the Guggenheim Museum in New York. His sculpture “Him” (2001) sold at auction at Christie’s in 2016 in excess of $17m. Within the same year, he installed “America”, a solid 18-karat gold toilet in the Guggenheim Museum’s restroom, free of use for the public. Cattelan is a four-time participant of the Venice Biennial.

From Andy Warhol and Roy Lichtenstein to Robert Rauschenberg and Jeff Koons, BMW has been collaborating with artists creating Art Cars for almost half a century. The BMW i3 series was launched in 2014 as part of the BMW i brand, standing for visionary vehicle concepts and technologies, connected mobility services as well as a new understanding of premium defined by sustainability. The “Spaghetti Car” by TOILETPAPER is a fully functioning electric vehicle and came with a certificate of authenticity signed by TOILETPAPER (Maurizio Cattelan and Pierpaolo Ferrari) as co-creators of this unique work of art.

About BMW Group’s Cultural Commitment For almost 50 years now, the BMW Group has initiated and engaged in over 100 cultural cooperations worldwide. The company places the main focus of its long-term commitment on contemporary and modern art, classical music and jazz as well as architecture and design. In 1972, three large-scale paintings were created by the artist Gerhard Richter specifically for the foyer of the BMW Group's Munich headquarters. Since then, artists such as Andy Warhol, Jeff Koons, Daniel Barenboim, Jonas Kaufmann and architect Zaha Hadid have co-operated with BMW. In 2016 and 2017, female artist Cao Fei from China and American John Baldessari created the next two vehicles for the BMW Art Car Collection. Besides co-initiatives, such as BMW Tate Live, the BMW Art Journey and the “Opera for All” concerts in Berlin, Munich and London, the company also partners with leading museums and art fairs as well as orchestras and opera houses around the world. The BMW Group takes absolute creative freedom in all its cultural activities – as this initiative is as essential for producing groundbreaking artistic work as it is for major innovations in a successful business.

With its four brands BMW, MINI, Rolls-Royce and BMW Motorrad, the BMW Group is the world’s leading premium manufacturer of automobiles and motorcycles and also provides premium financial and mobility services. As a global company, the BMW Group operates 31 production and assembly facilities in 14 countries and has a global sales network in more than 140 countries.