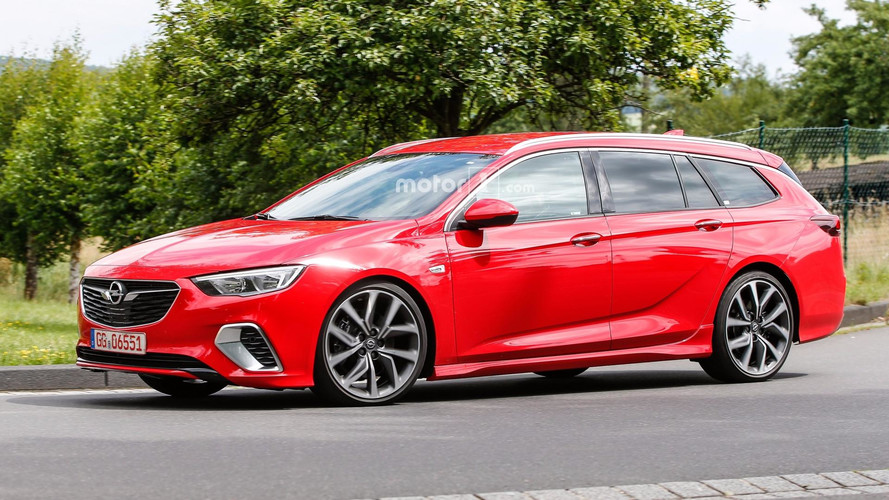 260 horsepower at the front, 520 liters of cargo space at the back.

When Opel unveiled the Insignia GSi about a week ago, it did not say anything about giving the Sports Tourer the higher performance treatment. It looks like it’s about to happen as an undisguised prototype of the wagon has been spotted roaming the streets with the full production body. The only thing that’s missing is the “GSi” badge on the trunk lid. Much like the hatchback depicted in the official images, the test vehicle is wearing a red-hot paint that makes it even more of an eye grabber. Expect those black Brembo brake calipers to receive a red finish on the final car as it is the case with the hatch.

Needless to say, under the hood it has the same turbocharged 2.0-liter engine with 260 horsepower (191 kilowatts) and 400 Newton-meters (295 pound-feet) of torque. Further down the line, a newly developed diesel engine will be added for the Insignia GSi, so expect the wagon to receive it as well.

Seeing as how there’s no disguise at all on this prototype, it is likely a sign we won’t have to wait much longer to check it out in press images. It’s not like those will be more revealing than these spy shots anyway… The hatchback is slated to celebrate its public debut at the Frankfurt Motor Show in September and maybe it will be joined by its more practical companion that can store an extra 30 liters in its trunk for a grand 520-liter total.

While the Insignia GSi has a V6-powered American counterpart in the new 2018 Buick Regal GS, it remains to be seen whether the United States will get the hot wagon as well. As a reminder, Buick is not going to sell the regular Regal wagon in the U.S. as only the rugged TourX version (Country Tourer in Europe) will be available.

Hopefully, Opel’s decision to resurrect the “GSi” badge doesn’t mean there won’t be an Insignia OPC later on.