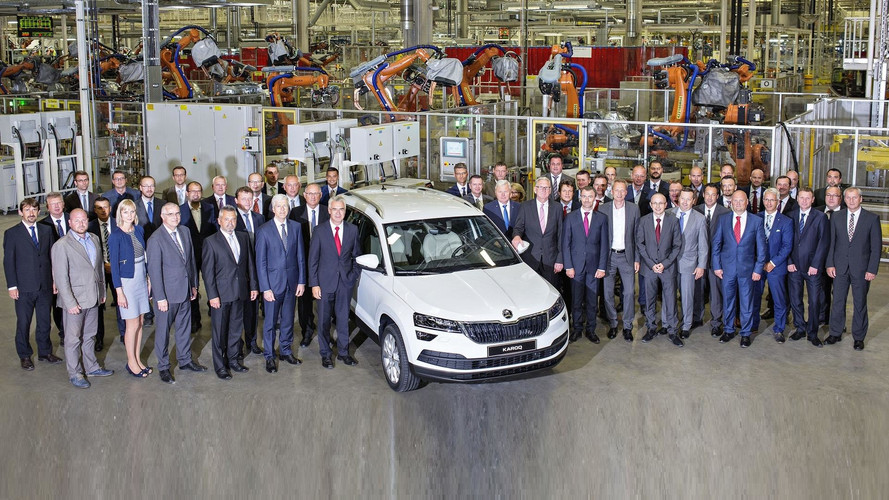 After posting the best first half of the year in the company’s history, Skoda is now ready to take the sales numbers even further with the addition of its first true compact SUV. Replacing the funky Yeti, the Karoq is now in production at the Kvasiny plant, one of the company’s three manufacturing facilities in the Czech Republic. About 8,000 people are working at the factory, which has been thoroughly upgraded in recent times and is set extend its annual production capacity to 295,000 units in the years to come.

The Kvasiny assembly plant is also responsible for putting together the Karoq’s bigger brother, the Kodiaq, as well as the flagship Superb in both hatchback and wagon flavors. The Superb was the first Skoda to be manufactured at this facility, way back in 1947. That being said, car production actually kicked off in the early 1930s and included the Jawa 700.

The Karoq and Kodiaq are only the tip of the iceberg in terms of Skoda’s model assault as the VW-owned marque has announced it will expand its offerings and focus is going to be on SUVs. While the company does not go into any details about the next high-riding vehicles, it’s easy to imagine something along the lines of a subcompact crossover related to the Fabia supermini. A coupe-SUV mashup in the same vein as the Vision E concept is also possible to allow the Czech brand further capitalize on the growing demand for crossovers.

Meanwhile, Skoda says customer deliveries of the Karoq are scheduled to commence in October. While the larger Kodiaq can be had with either a five- or a seven-seat interior layout, the new C-segment SUV comes exclusively with five seats. The three independent rear ones can be taken out entirely to create a van-like cabin. 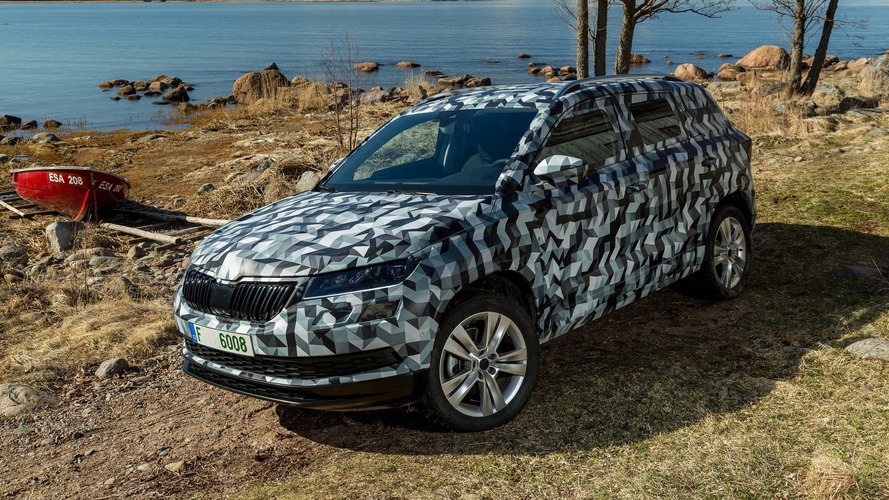 The compact SUV impresses with an emotive design, an extraordinary amount of space and state-of-the-art technology
› Since 2015, ŠKODA AUTO has invested approximately 11 billion korunas in developing the plant’s SUV production capabilities
› The brand-new, seventh model series will be delivered to customers from October
› With the KAROQ, ŠKODA is continuing to press ahead with its SUV campaign

Mladá Boleslav / Kvasiny, 26 July 2017 – Today the ŠKODA KAROQ rolled off the production line at the Kvasiny plant in the Czech Republic for the first time. The new compact SUV combines the brand-typical emotive and dynamic design with an extraordinary amount of space, new driver assistance systems as well as powerful and highly efficient engines. The first compact SUVs from the long-established Czech company will be delivered to customers this October.

“The start of series production for the new ŠKODA KAROQ is an important milestone for the entire company and, of course, for our workforce at the Kvasiny plant in particular,” said Michael Oeljeklaus, ŠKODA Board Member for Production and Logistics. “Over recent months, the entire team has prepared intensively for our new SUV model going into production,” explained Oeljeklaus.

The brand-new ŠKODA KAROQ, which celebrated its world premiere in Stockholm in mid-May, is a sport utility vehicle with character. Its design, characterised by crystalline elements, is a true representation of the long-established Czech brand’s new SUV design language. The numerous highlights include a boot capacity of up to 1,630 l, full-LED headlights and a freely programmable, digital instrument panel, which is available for the first time in a ŠKODA. Five engine variants are available with power outputs ranging from 85 kW (115 PS) to 140 kW (190 PS). The new ŠKODA KAROQ also impresses with clever specification features such as VarioFlex rear seats and the virtual pedal for hands-free opening of the tailgate.

Kvasiny is one of three ŠKODA production sites in the Czech Republic. With a current workforce of 8,000 people, the plant is the largest industrial employer in the Hradec Králové region. The production facilities have been comprehensively extended and modernised in recent years. Since 2015 alone, ŠKODA AUTO has invested approximately 11 billion korunas in developing the plant’s SUV production capabilities. In the coming years, production capacity will gradually increase to up to 295,000 vehicles per annum.

In addition to the new KAROQ, Kvasiny is currently producing the ŠKODA models SUPERB, SUPERB COMBI and KODIAQ. The first compact SUV of the brand - ŠKODA YETI, was successfully produced in Kvasiny from May 2009 to June 2017. The history of the site dates back more than 80 years. Cars were being produced here as early as the beginning of the 1930s, including the JAWA 700. The first ŠKODA to be produced at the Kvasiny plant was the ŠKODA SUPERB in 1947.

As part of ŠKODA’s 2025 future strategy, the brand will vigorously press ahead with the expansion of its model range in the coming years, with the primary focus on expanding the SUV portfolio. With the start of series production for the ŠKODA KAROQ, the company is now setting the next milestone. The market launch of the new compact SUV will take place this October.