The Trippy Tippy Hippy Van totally lives up to its name.

Anyone who follows the crazy racing action found with the 24 Hours of LeMons may recognize this vehicle. If by some chance you haven’t heard of this not-ready-for-primetime racing league, it’s an endurance race for those on an extremely limited racing budget, as in a $500 maximum allowance for the car. You can get all the nifty details at the LeMons website, but for now let’s focus our attention to this sideways Volkswagen camper van, which allegedly does meet the $500 maximum threshold because it completed its first LeMons race a few weeks ago.

The creator of this contraption is a LeMons regular named  Jeff Bloch, who’s both a mechanic and a former police officer, hence the nickname Speedycop. He’s known for building some of the wackiest vehicles in the series and this VeeDub – adorned with the tongue-twisting name of Trippy Tippy Hippy Van – is perhaps the reigning champion of weird. Yes, that’s a legitimate 1970s Volkswagen van body on the outside, mounted atop a 1988 Volkswagen Rabbit that was one of his former LeMons racers.

Obviously there’s more than $500 invested in this project, but here’s the catch. The cost of the car must not exceed that amount, but there isn’t a limit when it comes to safety equipment, which despite the joking nature of the racing series is a very serious component to every car. Being a mechanic, Bloch handled the build himself which included a complete gutting of the van exterior and all the fabrication to mount it securely to the Rabbit. To ensure visibility while creating the illusion of a van flipped sideways, one-way vinyl wraps were used to simulate the Volkswagen’s windows and undercarriage. Bloch can see out just fine, but spectators can’t see in. 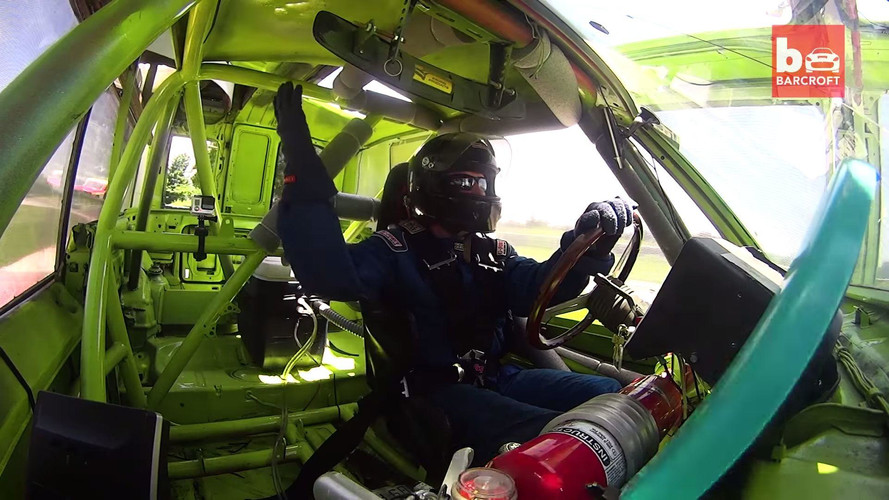 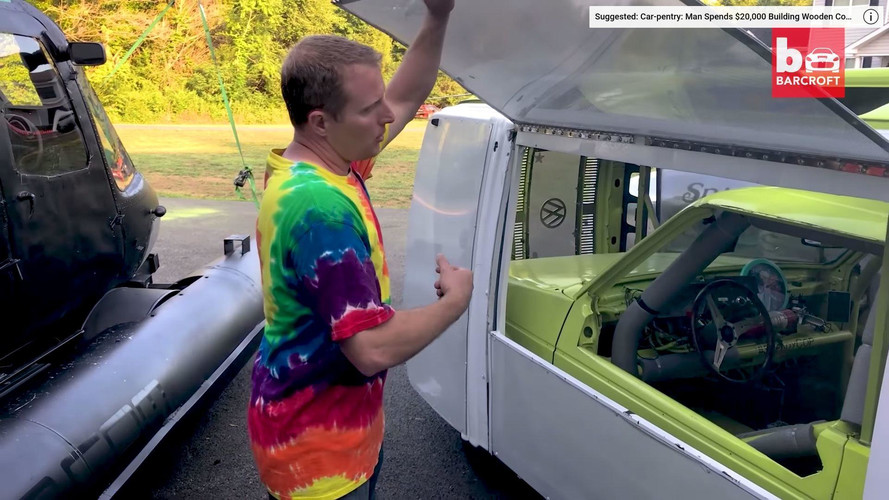 Powering the Trippy Tippy Hippy Van is a 120-horsepower VW 1.8-liter 16-valve engine sourced from a GTI. According to Bloch, it’s enough to power the contraption to 60 miles per hour in about 8 seconds. It tops out around 100 mph, and while it isn’t exactly nimble, the weight offers a surprising amount of grip in the corners. At least, until the whole thing starts to tip for real.

It’s probably not the fastest race car in the world, but we’ll give credit where credit is due. We can’t imagine a more creative or unique competition vehicle than the Trippy Tippy Hippy Van.