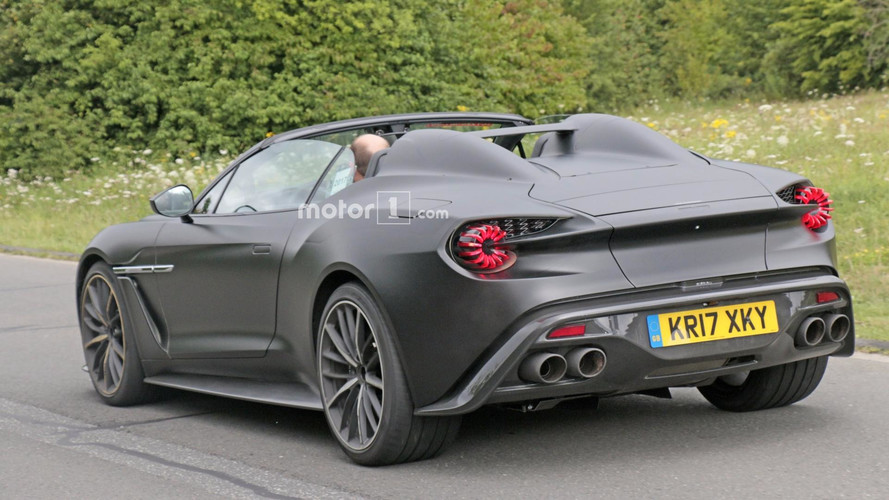 Words can't even begin to describe how gorgeous this is.

The rumor concerning an Aston Martin Vanquish Zagato Speedster was true as we are able to confirm through almost 30 new spy shots the existence of what will be an ultra-exclusive model. Set to follow the Vanquish Volante Zagato, the new version of the stunning droptop will ditch the rear seats and is going to adopt a pair of buttresses as a nod to Zagato’s signature double bubble roof.

As it was the case with yesterday’s spy images of the production-ready Vanquish Volante Zagato, the Speedster doesn’t have any sort of camouflage on its gorgeous body, though it’s missing the Aston Martin badges. Needless to say, both new Zagatos will take after the coupe introduced at the 2016 Concorso d’Eleganza Villa d’Este in Italy with cool taillights inspired by those of the track-only Vulcan.

It is believed the Volante variant will be introduced as early as next month in production specification at the Pebble Beach Concours d'Elegance where the namesake concept received its premiere last year. All 99 cars planned for production have already been sold, obviously.

As for the Speedster, details are not available about its debut date, but we do know it’s going to be even more exclusive than the Volante as just 28 units will reportedly be made at a yet unconfirmed price tag of €1.2 million (without VAT). Just seven of them are going to be made in European specification. Seeing as how Aston did not even bother to disguise the prototype, an official reveal might be right around the corner.

Both new Zagatos are expected to carry over the coupe’s 5.9-liter V12 engine developing 592 horsepower (441 kilowatts) and 465 pound-feet (630 Newton-meters). The Speedster could turn out to be a tad quicker than the regular Volante as a result of eliminating the rear seats, although the differences would be borderline unnoticeable in the real world. It’s not like it matters a great deal since these cars are more about styling rather than raw performance.

Some say the Speedster will be in the hands of those fortunate enough to own it beginning with late 2018.