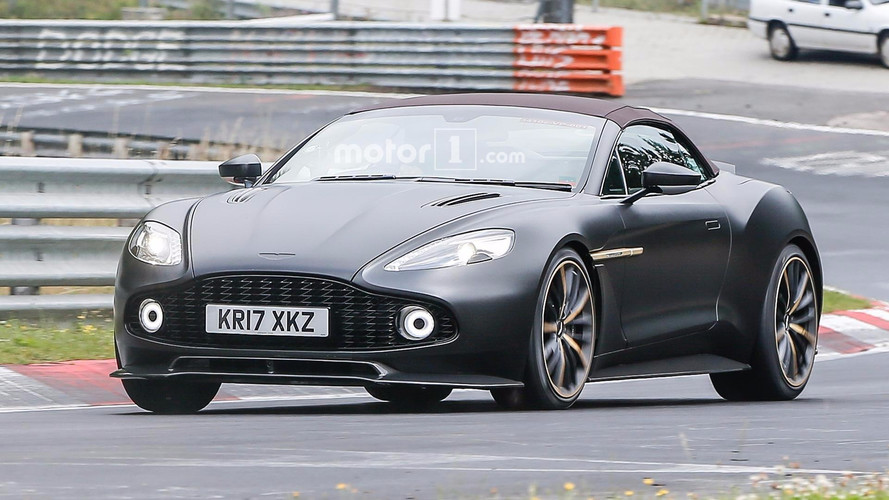 Aston Martin is close to delivering the first examples of these stylish convertibles.

Aston Martin unveiled the Aston Martin Vanquish Zagato Volante at the 2016 Pebble Beach Concours D’Elegance and promised to build a limited run of 99 of them. The company has been quiet up the roofless grand tourer, but a new batch of spy photos has revealed the production model. We are happy to report that the road-going version looks identical to the gorgeous concept from last year.

This Vanquish Zagato Volante wears a fabulous shade of satin black paint that accentuates the model’s lines. The design evolves the look of the existing Vanquish but makes the right tweaks to make a great looking vehicle even prettier. Compared to the concept, the only difference is an active rear wing not evident in the original images. The part is a bit disappointing to see because it ruins the smooth shape of the rear.

The droptop Zagato shares the Vanquish Zagato coupe's 5.9-liter V12 with 592 horsepower (441 kilowatts) and 465 pound-feet (630 Newton-meters). This is an ultra-stylish grand tourer where the driver wants to be seen, but if the person really wants to accelerate, the convertible can reach 62 miles per hour (100 kilometers per hour) in 3.7 seconds.

Aston Martin sold the entire 99-car production run of the Zagato Volante in October 2016, and they reportedly carried a base price of $850,000 each. The British brand’s Q customization division offered bespoke upgrades for an extra cost like anodized bronze trim and Bridge of Weir leather upholstery. Deliveries will start before the end of the year.

A rumor from last year indicated that Aston Martin might build a limited run of 28 examples of the Vanquish Zagato Volante Speedster that would ditch the rear seats and add nacelles behind the seats.