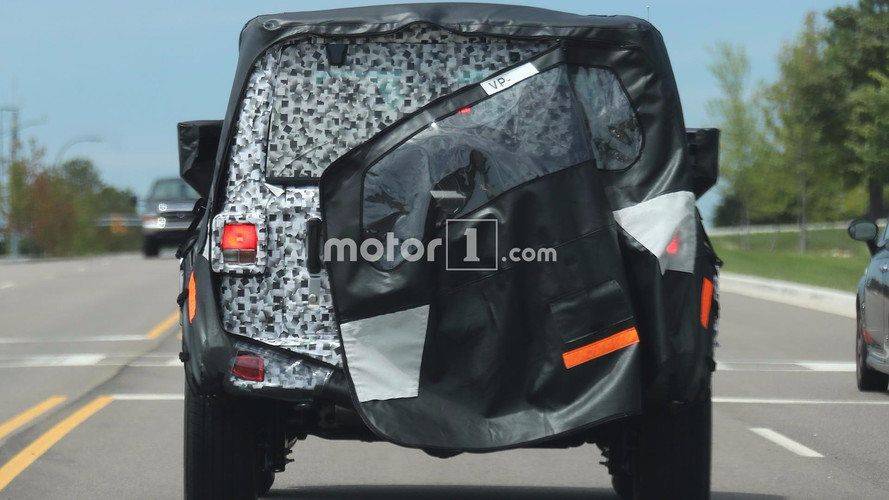 The photos also provide a look at the Wrangler Unlimited with a soft top.

Spy photos are gradually giving us a better look at the next-gen Jeep Wrangler, and a new batch reveals the body cladding partially unzipped. It lets us spot the taillight on the much-anticipated SUV. The Wrangler Unlimited also shows up in soft top guise.

The rear concealment panel partially fell off of this test mule and revealed the taillight. The piece is still camouflaged, though, and it’s possible that these are provisional units. A leaked dealer presentation revealed panels with red LEDs outlining the rectangles. The ones here have a completely different layout.

These shots provide a good look at the rear, too. The back glass appears to have a hinge at the top, so the owner would likely be able to open it separately from the outward swinging lower door.

This Wrangler Unlimited four-door's soft top is one of multiple roof configurations available on the SUV. Earlier spy pics also show the hard top and a version with removable panels that would some open-air motoring. A power-sliding hard roof might be an option, too.

Earlier spy photos show the new Wrangler with a colorful dashboard panel and metallic trim. The infotainment system sits high on the center stack. Heating for the seats and steering wheel is available.

A recent rumor indicates the new Wrangler might debut at the 2017 Los Angeles Auto Show on December 1, which makes sense since production starts in November. At launch a 3.6-liter V6 and 2.0-liter turbocharged four-cylinder will reportedly be available. The four pot will only come with an automatic gearbox, but six-cylinder buyers will have the choice of a manual or automatic transmission. The diesel will arrive late in the 2019 model year.