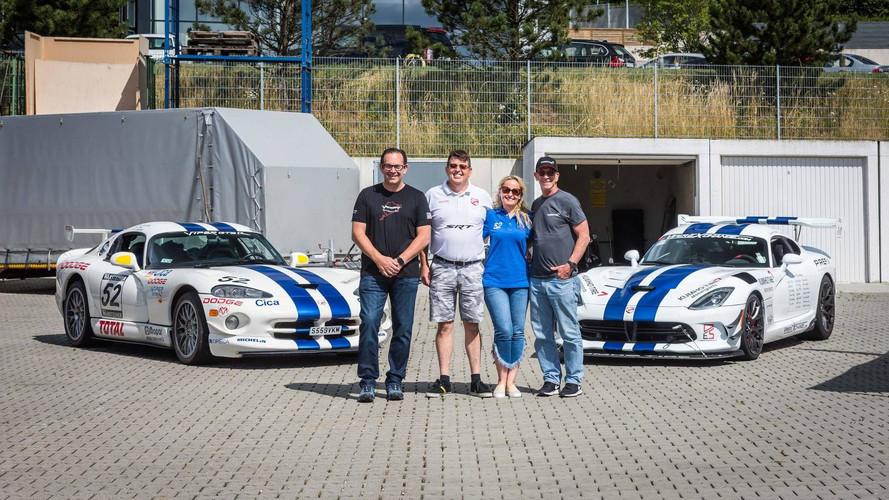 Very soon the curtain will fall on the SRT Viper, Dodge’s front-line war horse in the world of bigger-is-better performance for 25 years. The supercar’s Conner Assembly plant in Detroit will close for good in August, but a group of extraordinarily passionate Viper enthusiasts are doing everything possible to give it the best possible send off – by attempting to reclaim the title as the fastest production car to ever lap the Nürburgring.

When we say extraordinarily passionate, we aren’t kidding. Dodge had no interest in sending this final Viper generation to the track despite having done it twice in the past, so a loyal group of fans and owners decided to make it happen on their own. On Facebook they’re called The Viper Ring Record Run Powered by Kumho and co-sponsored by Prefix, and if that’s a mouthful to say it’s because getting two Viper ACRs from the United States to Germany isn’t cheap. Aside from sponsorships, the group estimated it would cost between $150,000 and $200,000 to make the trip and the record attempt happen. They launched a GoFundMe account back in January and as it stands right now, $177,642 has been raised for the effort. In other words, all systems are go.

As you read this, a pair of Viper ACRs are patiently waiting out rainy weather at the ‘Ring to have a proper go at the record. The cars have been there nearly a week thus far undergoing testing for optimal suspension settings and troubleshooting a few problems. Once the skies clear, the ACRs will seek to claim yet another record to the 13 already held at U.S. tracks. It won’t be easy – technically speaking the electric Nio EP9 holds the production car record at 6:45.9, but it’s extremely limited production and availability have many people considering its time as unofficial. It’s a similar story for the Radical SR8LM which, though technically street-legal, really isn’t remotely practical for even occasional street use since it has no storage, no options, no and more importantly, no windshield or roof.

As hardcore as it is, the Viper ACR at least has an enclosed passenger compartment with some creature comforts and space for actual things. That’s why most people see the Lamborghini Huracan Performante’s 6:52 time as the Viper’s goal.

Can the burly American pull off one last track record before its V10 howls into the sunset? The Viper Ring Record crew will have daily updates on their progress, and we’ll of course chime in should we get an official word. Win or lose, it’s sure to be one hell of a sendoff for this legendary American supercar.