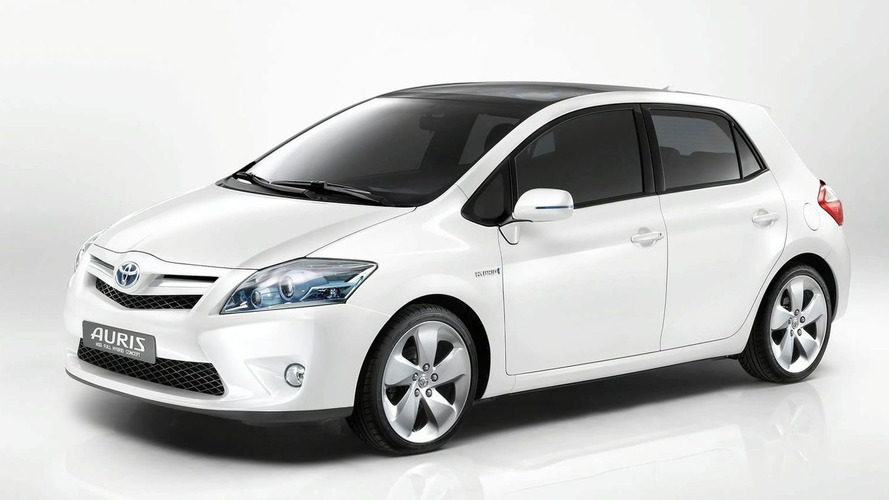 Toyota is introducing the near-production ready Auris HSD Full Hybrid concept. We have pictures and full details inside.

Toyota is rolling their spin machine on the new Toyota Auris HSD Full Hybrid Concept.  The study will have its moment in the spotlight at the Frankfurt Motor Show later this month, before hitting the salesroom floors next year.

Even though the car can be driven either on petrol alone, or just electric, it can also run on a combination of the two.  Unfortunately, the engine's power figures do leave quite a bit to be desired.  Although it uses a reasonably sized engine, featuring a 1.8-liter displacement,  it only manages to put out 97 horsepower.  This leads to a 0-100 km/h time of "around 10 seconds," which means that the car probably hits 100 in 10 to 10.5 seconds under lab conditions, and maybe a second slower in the real world.

Still, the CO2 emissions level of under 100 grams per kilometer is very respectable.  The electric motor runs on a nickel-metal hydride battery, and it runs for 1.25 miles unassisted, at speeds up to about 30 mph.  Toyota did not release power figures for the motor.  It also uses three, manually selectable driving modes, including ECO for maximum efficiency, Power for performance, and EV for very short all-electric sprints.  Apparently, there is a fourth mode that is automatically selected by the car, but Toyota failed to mention what this mode is (Robocop's fourth directive, anyone?).

Ultimately, it is the five-door concept's interior experience that will be a big selling point.  The roomy interior is made to feel all the more spacious with its full-glass roof.  Well, not full-glass.  There are solar panels built in to provide power for the ventilation system.

Those in the cabin will be surrounded by blue Gaucholino leather, with light blue stitching.  The relaxing blue hue is also used to light up the instrument cluster.  Ambient lighting is also used at various points.  The blue is meant to reflect Toyota's hybrid division, which is also seen in the vehicle's badging.  Padded carpeting is also used to make the vehicle more comfortable.

Exterior changes have also been made to this Auris, seen in the new front end, and new front and rear bumpers.  This is meant to give the car a better look, while helping to reduce the drag coefficient to 0.28.  Front and rear lighting is also done with LEDs.

Toyota plans to put the Toyota Auris HSD Full Hybrid on the market sometime in the second half of 2010.  The car will be built in the UK at the company's Burnaston factory, just outside of Derby.  By 2020, Toyota hopes to have a hybrid version of each of their models on the market.