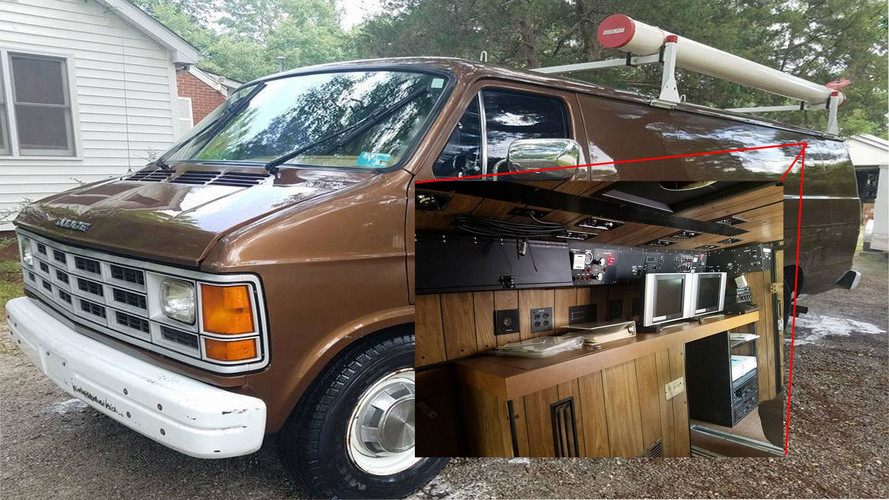 It's good for camping and totally spying on your neighbors.

With a few notable exceptions, big vans have gone the way of the dodo. So when a classic American van with just 23,000 miles shows up for sale, more than a few people take notice. That low mileage might get overlooked, however, on this particular Dodge Ram 350. That's because the back is also full of FBI surveillance gear.

Yes, you can go full spy hunter with this Cold War relic, currently selling on eBay for $11,100 with nearly three days to go as of this posting. It should be noted that there’s no mention of a reserve, so presumably this van will have a new owner for at least this price. Honestly, with the following these big one-ton extended vans have, that's not a bad price if was just a low-mile cargo hauler.

On the outside this plain Jane Dodge is about as anonymous as you can get. The roof rack with PVC tube is standard-issue equipment for every plumbing and electrical contractor in America. We prefer our secret ops vehicles to be wearing a shade of secret-agent black, but in this instance baby poop brown completes the exterior disguise to perfection.

Inside, things are a bit different. Okay, it’s a lot different, starting with a bevy of batteries to power a pair of LCD screens, a tape recorder, amplifiers, rows of unidentifiable electronics, and according to the auction description, a freaking radar. We have no idea how that works, but there's also a radio scanner, an intercom, and more electrical outlets than the television section at Best Buy.

The 1970's era wood paneling throws us for a loop given all the tech, but that could be a by-product of conversion companies accustomed to making camper specials out of such machines. It also has propane tanks, a toilet for taking care of business during long stakeouts, and the ability to start or stop the engine from the back. Neat.

The seller claims to have all paperwork to verify the van’s authenticity. It was reportedly used for federal drug investigations and bought at a government auction before ending up on eBay.

This is certainly one of the strangest vehicle auctions we’ve seen in a long time, and while we’re intrigued, we wonder what someone would actually do with all this gear in the back. If you bought this van, what would you do with it?