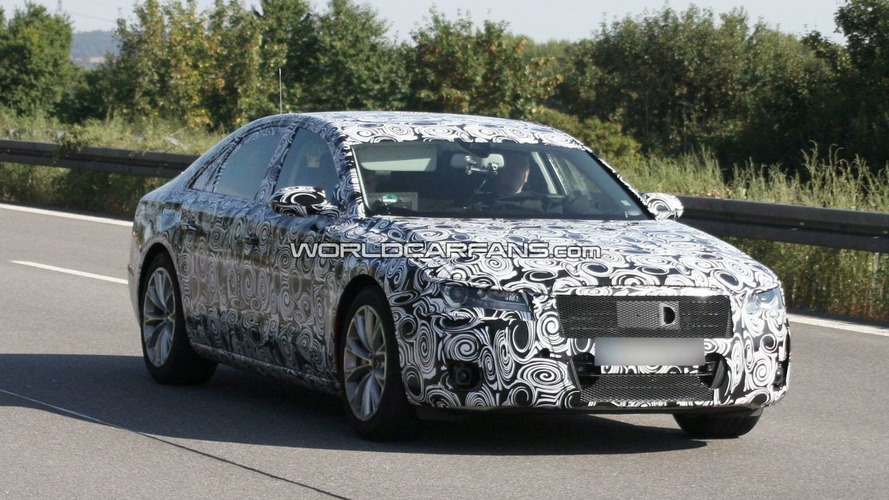 First full body shots of the next-generation Audi A8 (codenamed D4) have been exposed. Black and white psychedelic camouflage keeps the juicy details away but one or two design elements are visible.

Some observers have stated that Audi is not likely to unveil the next-generation A8 at the Frankfurt Motor Show because the company does not want its flagship to share the limelight with the other significant debuts. Therefore while it's been confirmed for unveling in 2010, the A8 (codename D4) will not be seen in public for at least a year.

Good thing our spy photographers are still out there. They caught this camouflaged model being tested. These are the first pictures showing the full prototype and as expected very little detail is clearly visible. One thing for sure is that the front grille is large while the bonnet seems to bulge as it makes its way from the fender to the A-pillar. The same bulge appears on the side of the boot above the LED rear rights. A number of sensors aimed at improving safety have been placed on the bumpers.

Likely engines include the 3.0 TDI V6 which should make about 190kW (258hp) and over 540Nm by then. Petrol V6s and V8s will be comparable to rivals' in power output and efficiency. Audi will most certainly get into the next big thing in eco-friendliness, either by installing a hybrid or full-on electric drive system in the big luxury sedan. Remember Audi pioneered aluminium Space Frame body technology with the first-generation A8 and is expected to exploit this further.