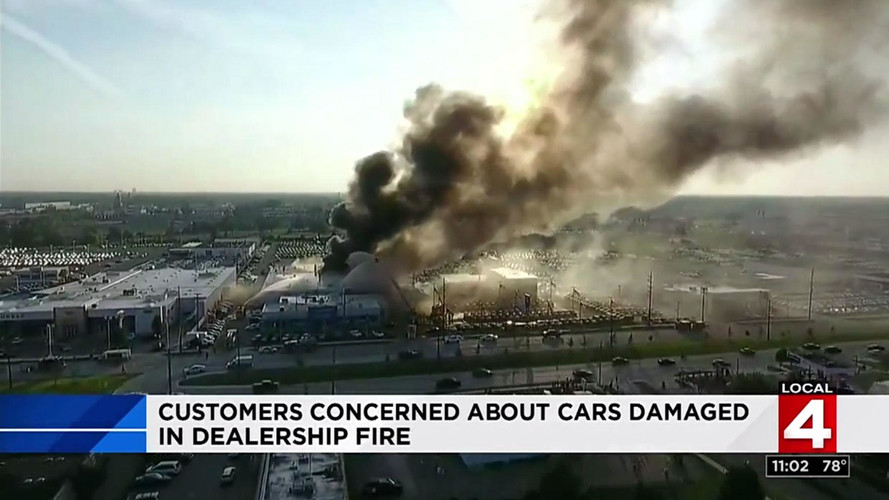 Flames engulfed nearly all of the service bay, and 30 customer cars.

A massive fire broke out Tuesday at the Buff Whelan Chevrolet dealership in Sterling Heights, Michigan, setting more than 30 cars ablaze and seriously damaging the building. It all started at around 7:30PM in the service area when a janitor accidentally caused a “big ball of flame to erupt" while using a machine to clean the floors.

The fire quickly spread to areas of the service bay before engulfing cars on the lot and the main building. "We're hearing a lot of explosions right now," Sterling Heights Fire Chief Chris Martin said in a statement during the event. "We're dealing with a lot of chemicals. There's a paint shop with a lot of paint. There's a storage of over 150 airbags that are explosive.”

Viewers reportedly as far as five miles away from the blaze called Local 4 News in Detroit to report it. Videos and images (below) show black smoke billowing up from the engulfed dealership.

A total of 12 different fire department responded to the scene after Martin called for a fourth alarm. A total of 15 cars in the service building and another 15 in the lot burned by Wednesday morning, all of them belonging to customers. Thankfully, nobody was injured in the event. The dealership said in a statement that it will carry on “with business as usual.”

GM released a statement on Wednesday saying that it has been in contact with the Buff Whelan dealership. "We’re working with them to help take care of their customers and recover from the fire as quickly as possible," Chevrolet said in a statement.