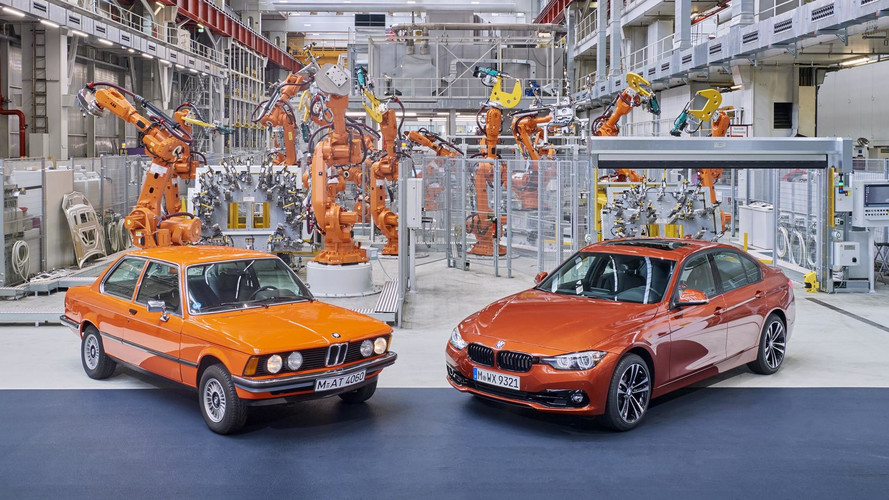 Orange you glad BMW is coming out with a retrolicious 3 Series?

Special versions come and go, but BMW is doing things differently this time as it has decided to revisit the 3 Series Edition originally unveiled in May to celebrate the production start by bringing along its source of inspiration. It’s a first-generation 3 Series (E21), which was the first model in its class to feature six-cylinder engines. The 320 launched in the fall of 1977 had 122 hp (90 kW) and was followed several months later by the punchier 323 with 143 hp (105 kW) on tap.

The original 3 Series was offered initially with an Inca Orange shade before switching to a Phoenix Orange hue, so it comes as no surprise the F30 Sedan seen here wears a similar striking paint dubbed Sunset Orange. You can have it not just as a sedan, but also as a more practical Touring model in three distinct flavors: Edition Sport Line Shadow, the Edition Luxury Line Purity, and the Edition M Sport Shadow.

The Sport ones can be visually distinguished by their black inserts in the headlights and taillights, a blacked-out kidney grille, 18-inch wheels with a double-spoke design, and more black accents for the lower air intake and the exhaust tips. Go for the M Sport Shadow and BMW will also throw in M alloys and an aero package.

As for the Luxury Line Purity pictured above, this is a fancy version of the 3 Series with satin-finished aluminum accents noticeable on the side window surrounds, grille, air intake inserts, and rear bumper cover. This one sits on 17-inch wheels with a special design.

The interiors are also different depending on which of the three you select, but all share a contrast stitching on the dash and come with an upgraded instrument cluster featuring more functions. As you can imagine, the Sport-badged versions have a number of M items whereas the Luxury variant gets a plush leather upholstery in a new Cognac color combined with wood trim strips and pearlescent chrome accents.

All three Edition cars come as standard with LED headlights and fog lights, just like the regular recently updated 3 Series models. You can order the retro-inspired 3 Series with a multitude of engines, kicking off with the 116-hp diesel inside the 316d all the way up to the 326-hp straight-six powering the 340i.

Introduced in the summer of 1975 as a replacement for the 02 Series, BMW’s most successful model has racked up more than 15 million sales. The seventh generation (codenamed G20) is expected to make its debut towards the end of 2018 or early 2019.

Exclusive equipment options for the Edition Sport Line Shadow, the Edition Luxury Line Purity and the Edition M Sport Shadow render the model series, 15 million of which have been sold so far, more attractive than ever.

Munich. During the next days, production of the new edition models of the most successful series in the history of the company will commence at the BMW Munich plant. Once again, the BMW 3 Series – the epitome of sportiness in the mid-range class for six generations now – will get an extra dose of driving pleasure. This will be guaranteed by the exclusive equipment options offered by the Edition Sport Line Shadow, the Edition Luxury Line Purity and the Edition M Sport Shadow, which are all available both for the BMW 3 Series Sedan and the BMW 3 Series Touring. They optionally underline either the dynamic driving experience or the modern premium appeal offered by both models. More attractive than ever, the BMW 3 Series highlights those characteristic qualities that have been a distinguishing mark of this series for more than 40 years now.

With its brand-typical characteristics, even the very first model generation of the BMW 3 Series managed to inspire a wide target group. Just six years after its debut in the summer of 1975, it replaced its predecessor, the legendary BMW 02, as the biggest selling model in corporate history. In the following generations, the car’s popularity steadily increased, with the BMW 3 Series becoming the world’s most successful premium automobile. To this day, it also continues to hold top position in BMW’s inter-brand statistics. Correspondingly fast, the BMW 3 Series continues its success story: Whereas it used to take 66 months to exceed the threshold of a million sales, the current generation of the BMW 3 Series recently took barely 29 months to reach sales of one million. Meanwhile, more than 15 million BMW 3 Series vehicles have been sold.

The BMW 3 Series: Tailor-made driving pleasure from the very start.

Enhancing every-day traffic situations with brand-typical driving pleasure has been the mission of the BMW 3 Series mission right from the start. When it made its debut in 1975, powerful engines and a sporty suspension setting provided for a balance between driving dynamics and comfort that was unmatched in the segment. Moreover, the driver-oriented BMW 3 Series cockpit of the first generation also had its premiere. The ergonomically optimised positioning of control elements was a further contribution towards the characteristic driving experience. Additional wishes could be fulfilled with high-quality equipment options. The list of these included not only a 5-speed transmission or a 3-speed automatic transmission, but also air conditioning, vent windows, sports seats and four different radio variants.

40 years ago: The six cylinder engine makes its debut in the BMW 3 Series’ segment.

Exactly 40 years ago, the BMW 3 Series strengthened its top position in terms of driving pleasure with the introduction of an exclusive innovation under the bonnet. It was the first vehicle in its class to feature six-cylinder engines. The new straight six-cylinder power units developed especially for the BMW 3 Series delivered 90 kW/122 hp in the BMW 320 launched in the autumn of 1977 and 105 kW/143 hp in the BMW 323 that followed a few months later.

Above all, the BMW 323i with petrol injection, electronic engine management and transistorized ignition rapidly became an everyday athlete. With its high-revving, smooth-running engine, but above all with performance normally only achieved by sports cars, it remained unrivalled over a long period of time.

Sports seats in fabric/leather and interior trim strips in the new variant Dark Aluminium Carbon with Pearlescent Chrome accentuating strips provide for a sophisticated and sporty flair in the interior of the BMW 3 Series Edition Sport Line Shadow. Interior features of the Edition M Sport Shadow comprise leather sports seats with blue contrast stitching and interior trim strips in the variant Dark Aluminium Carbon with Pearlescent Chrome accentuating strips. These features are complemented by the M steering wheel, anthracite roof liner, M doorsill trims and the Driver Experience Control Switch incl. SPORT+ mode, all of which are already included in the range of equipment for the model M Sport. In the interior of the Edition Luxury Line Purity, the leather trim, which is also available in the new colour variant Cognac, and interior trim strips in the precious wood version Fineline light with accentuating strips in Pearlescent Chrome contribute towards the exclusive ambience inside the car. All edition models are equipped with an instrument panel with new, distinctive contrast stitching and an instrument cluster with an extended range of features. Moreover, models of the editions Sport Line Shadow and Luxury Line Purity are fitted with a newly designed sports steering wheel.

Parallel to the market launch of the new edition models, the range of standard equipment for the BMW 3 Series Sedan and the BMW 3 Series Touring is being complemented by LED headlights and LED fog lamps. The advancement achieved with these exceptionally bright headlamps and the distinctive look of the dark inserts featured on the Edition Sport Line Shadow and the Edition M Sport Shadow are reminiscent of an innovation that was presented 40 years ago. At that time, the new six-cylinder models of the BMW 3 Series were fitted for the first time with double headlamps.

The current version of the driver-oriented cockpit still typical of the BMW 3 Series is the result of consistent further development. The Control Display, which in familiar manner is slightly inclined towards the driver, now depicts the control menus in a tile arrangement with animated graphics in live mode and also features in conjunction with the navigation system Professional a touch screen function. The multifunction instrument display is now available as an additional new feature. Depending on the driver experience mode selected, the driver has a choice of various different digital display options.

Furthermore, with the available range of body colours, the BMW 3 Series demonstrates yet again a sense of tradition. New in the range is Sunset Orange – a contemporary interpretation of the colour which was popular in the 1970s and available for the first generation of the BMW 3 Series initially as Inca Orange and later as Phoenix Orange.