SUV Launches Onto Roof Of Home That Was Just Paid Off 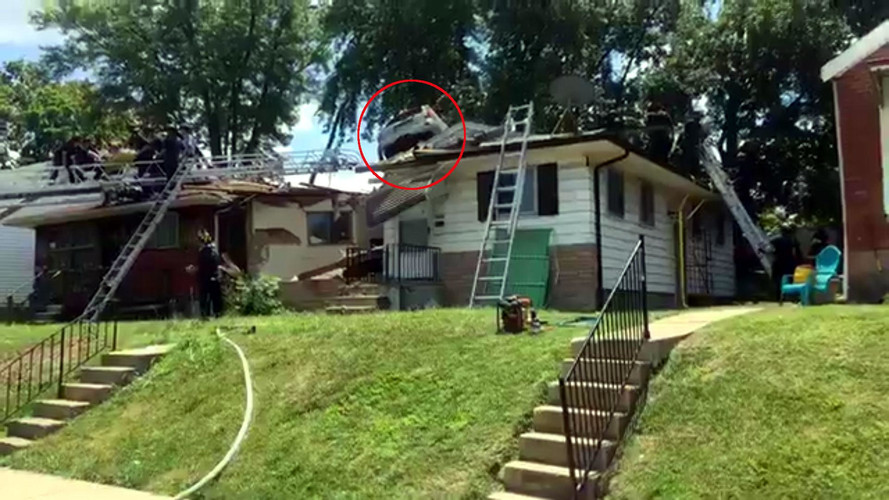 Nobody was home at the time, but the driver is in serious condition.

There are fails, and then there are epic fails. This, ladies and gentlemen, is what lies beyond. We suspect St. Louis resident Bruce Redding would agree, because it was his house that ended up with a GMC Envoy sport-utility vehicle perched atop it. Actually, smashed atop might be a better phrase, as the aerial view posted on Twitter from the St. Louis Fire Department clearly shows the extent of the damage done to both the GMC and the home.

According to the St. Louis Post-Dispatch, the crash occurred this past Sunday afternoon. It’s not clear if the driver was on drugs, alcohol, or suffered some kind of medical emergency, but what is clear is that the SUV was traveling well over the 25 mph speed limit in the neighborhood. The driver ran a stop sign at a T intersection, hit an embankment, and launched through the house before finally coming to rest on the roof.

Fortunately for Redding, he was not home at the time, nor was anyone else. The driver of the SUV wasn’t as lucky; firefighters say he was semi-conscious at the scene and was transported to the hospital where he’s listed in serious condition.

While seeing an SUV on the roof is certainly something new for residents in the area, a report from KSDK in St. Louis says speeding and crashes have long been a problem in the area. Redding himself said his house had been hit before, while others reported similar incidents.

The kick-in-the-pants for Redding is that he’d just paid off the mortgage on the home, which has been in his family for 40 years. The house was insured of course, but at this point, it’s unclear if the structure is even repairable. At least he has his health, which is more than can be said for the driver. Regardless of the circumstances, we wish him a speedy recovery.