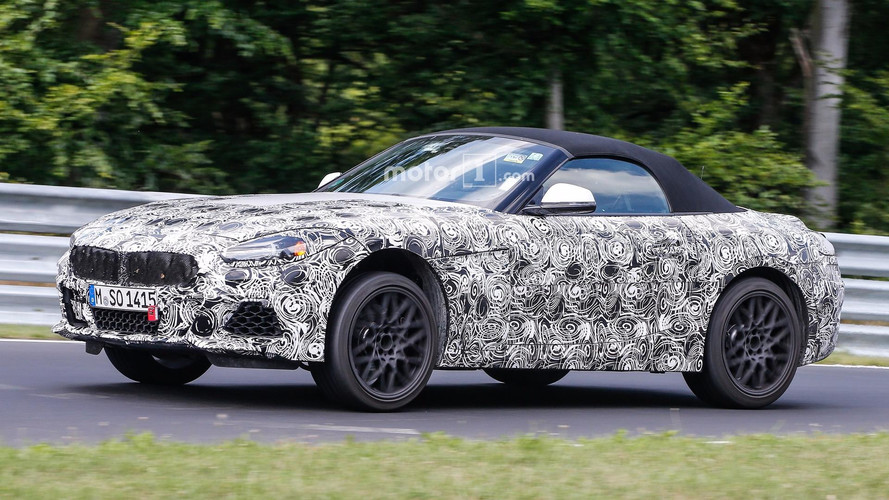 Looks like the roadster will get an off-road package. We kid, they were likely testing the suspension.

BMW is keeping itself busy these days at the Nürburgring where it has a prototype of the new Z4 carrying the production body, but with those same annoying extra panels on top of which the Bavarians have slapped on an abundance of swirly camo. Some of the attached images come to suggest the roadster was being subjected to suspension tests judging by the considerable gap around the wheels, especially at the front axle.

While the headlights are unlikely to be the final design, the curvaceous shape of the clusters won’t change. Things get more interesting at the back where the next-gen Z4 seems to have the final taillights and these are partially exposed as the upper section looks to be camo-free. Those two chunky exhaust tips could indicate we are dealing with a hotter version, possibly a Z4 M40i of some sort rocking a turbocharged 3.0-liter inline-six engine good for well over 300 horsepower.

Lesser versions of the new Z4 will feature four-cylinder engines and the lineup might be topped by a hybrid version putting to good use Toyota’s expertise in the electrified area. Even if this is flagship version is indeed being planned, it seems highly unlikely BMW will come out with the big guns from day one as it will want to save the icing on the cake for later in the sports car’s life cycle.

Rumor has it we won’t have to wait a very long time to see the Z4 as it will debut as early as next month at the Pebble Beach Concourse d’Elegance. However, it should be mentioned the gossip talks about a concept rather than a full production model, but even so we have a feeling it will be very close to the real deal considering the road-going droptop with a fabric roof is set for a 2018 launch.

The BMW Z4’s alter ego, the new coupe-only Toyota Supra (name not confirmed), will allegedly be previewed by a concept as well. It will happen at the Tokyo Auto Show in October ahead of the production model’s debut at some point next year.