Would You Let Someone Fire A Cannon Through Your Lamborghini?

No pressure, it's just a giant bullet going through the tiny opening on each side of the supercar.

Edwin Sarkissian runs a YouTube channel where he shoots stuff, generally with really big guns. In a recent series of videos, he partnered with gunsmith Mark Serbu to see how much damage a 20-millimeter cannon can do. At roughly 0.79-inch in diameter, these bullets are absolutely massive. One of their stunts put a Lamborghini Huracán in serious danger because Sarkissian took on the challenge of shooting watermelons through the open windows of the Italian supercar. 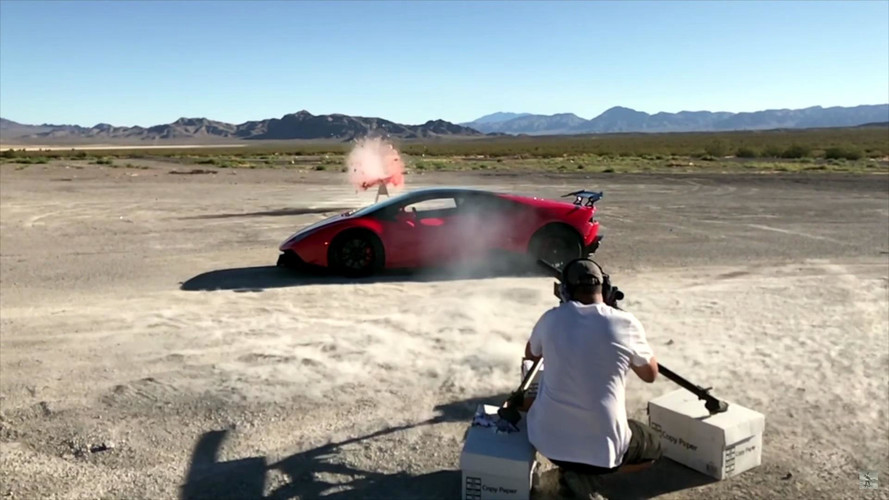 Sarkissian doesn’t confirm anything specifically, but this seems to be his Lamborghini, which raises the stakes even higher. He acts very nervous about the prospect of destroying the car, and missing the watermelons would do serious damage to the supercar if anything goes wrong.

Check Out These Other Weird Car Storie:

The video is amazing to watch. The shockwave from the cannon shot is visible on the ground in the slow-motion version of the video, and the Huracán’s suspension appears to rock just a little in the ultra-slow cut. The bullet turns the watermelons into a little pile of red goo.

For reference of what could happen if something goes wrong, check out the clip below of Sarkissian and Serbu shooting a block of titanium with the 20mm cannon a couple times. The video offers a much better look at the destructive power of this gargantuan bullet and lets you easily imagine the potential damage to the Lamborghini.

Since Sarkissian doesn't destroy the Huracán, here is a chance to see what the 20mm round would do to a vehicle. The clip below shows the bullet's ability to tear apart a motorcycle, even at rather long distances.