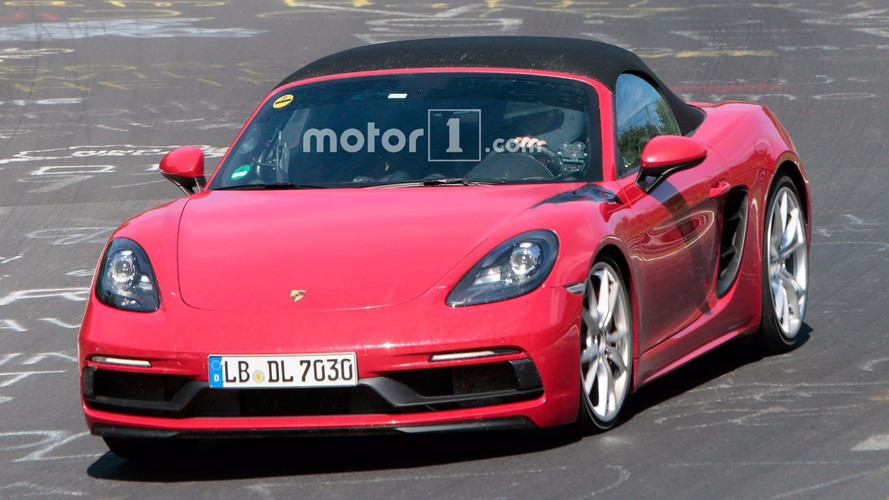 The company doesn't bother to hide some of the new pieces on the body.

A test mule Porsche 718 Boxster GTS is under development at the Nürburgring, and new photos reveal some of the differences versus the current Boxster S.

The GTS features a new front fascia without the body-color uprights from the part on the Boxster S. There are still ducts in it for channeling air to the right places, though. Farther down, there’s also a small splitter.

This model also features an odd piece of triangular camouflage on top of the driver’s side fender. It’s only on one side, though, and not on an earlier test mule. A bulge underneath the concealment suggests this might just be a sensor for use during the model’s development, but Porsche also might have something special in mind for the GTS’ body.

The test mule is lower than the standard Boxster, and at the back, the model has a larger, more complicated diffuser than on the standard vehicle. Two center-exit exhausts still poke out of the rear like on the S.

As part of the GTS’ upgrades, expect Porsche to boost the 2.5-liter turbocharged boxer four-cylinder’s output. It makes 350 horsepower (257 kilowatts) and 309 pound-feet (420 Newton-meters) of torque in the Boxster S, so the GTS should be quite a speedy roadster. Upgrades to the suspension and brakes would help cope with the engine's extra performance.

The 718 Boxster GTS might debut this year, but don’t expect to see the roadster at the Frankfurt Motor Show in September. We currently anticipate seeing the new Cayenne and possibly also the refreshed 911 GT3 RS at the German event. Three premieres there don’t seem very likely because Porsche would split the press attention too much.