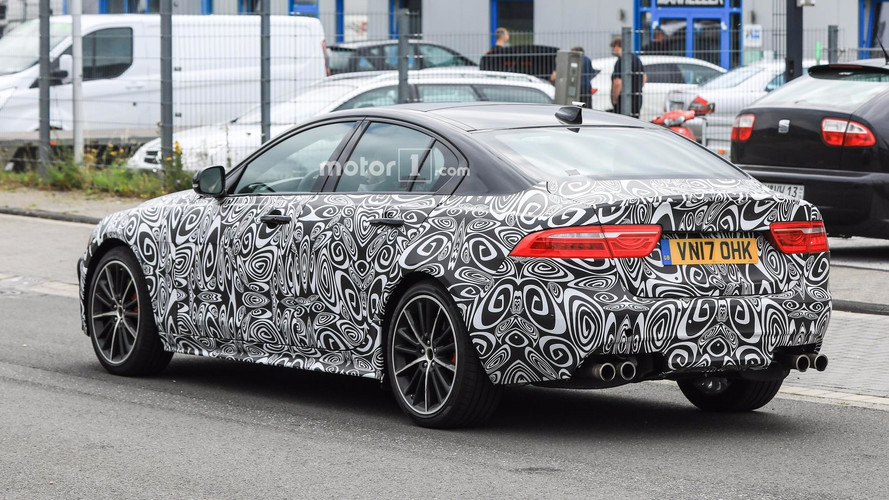 The prototypes were out for M3 blood.

Jaguar will build only 300 units of the bonkers 592-horsepower XE Project 8, but thankfully the lesser SVR spotted testing here on public roads will have greater availability. Maybe “lesser” is not the most suitable term to use considering we are still taking about a supercharged V8 super sedan set to go after the likes of BMW M3 and the Mercedes-AMG C63 S.

Check out the Project 8 in detail:

It’s easy to differentiate the Project 8 from the SVR as these prototypes don’t have the big rear wing, nor do they have the flared wheel arches and the sizeable side skirts. In addition, the lower front grille has a different shape and the test vehicles are not glued to the road as it’s the case with the limited-run XE.

Checking the license plates with U.K.’s Driver and Vehicle Licensing Agency (DVLA) turned out to be a futile effort as the results did not disclose the identity of the engine. That being said, it’s probably a safe bet to assume the XE SVR will rock a supercharged 5.0-liter V8 engine with somewhere in the region of 500 hp, so that it won’t step on the Project 8’s toes. For reference, the XE S in the 2018 model year has been blessed with an extra 40 hp and its supercharged 3.0-liter V6 now churns 380 hp.

It will be interesting to see whether Jaguar Land Rover’s Special Vehicle Operations (SVO) will go with a rear-wheel-drive layout or will implement an AWD system as it’s going to be the case with the Project 8. Adopting an all-paw setup would imply some extra weight, but it might be a compromise Jag is willing to make in order to make sure all that power will be sent to the road as efficient as possible.

It goes without saying the SVR will be considerably quicker than the XE in the available hot S guise, which runs to 60 mph (96 kph) in 4.8 seconds and maxes out at 155 mph (250 kph). The sprint could be done in half a second quicker while Jaguar might decide to loosen up that electronic top speed limiter to enable the sedan reach a higher velocity.

When will we see it without the disguise? It’s hard to say, but maybe Jaguar will bring it to the Frankfurt Motor Show in September or wait for another major auto show, like Los Angeles in December or Detroit in January 2018. At the latest, the XE SVR will debut March next year in Geneva.