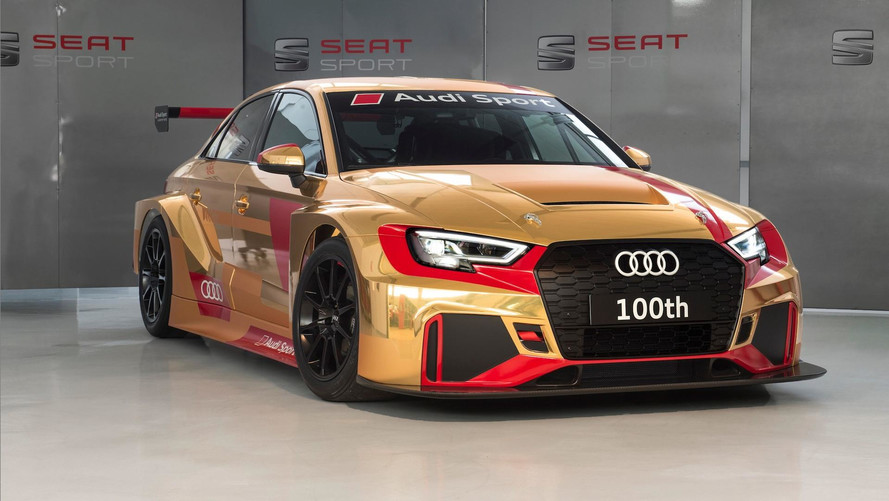 Less than a year after its introduction at the Audi Summit in Barcelona, the Audi RS3 LMS is already being considered "a commercial success." This week the company delivered its 100th example of the touring car, and naturally it came with a few special features to boot.

The RS3 LMS wears a unique gold livery with red Audi Sport accents found throughout the body. The front fascia sees red accent surrounds on the headlights and grille, with the Audi Sport logo emblazoned in red on the door panels, side skirts, and rear bumper. The massive rear wing is finished in black with the red Audi Sport logo underneath.

"In just its debut season, we have already delivered 90 examples of our race car to customers around the world and have received preorders up to the 100th model," said Chris Reinke, head of Audi Sport customer racing. "We’re proud that our entry model for touring car racing has gone down so well and that it is already such an important pillar of our model range."

Since its introduction last September, customer teams have contested 125 races on three continents – America, Europe, and Asia. A total of 73 podiums have been achieved, including 24 victories in both 12- and 24-hour endurance races. Four championships in total have been recorded for the RS3 LMS, two in Italy, and another two in Japan.

Much of the same racing technology can be found on the road-going RS3, including the turbocharged, five-cylinder engine. From the factory it produces 400 horsepower (298 kilowatts) and 354 pound-feet (479 Newton-meters) of torque, and comes with an asking price of $54,500. The Audi RS3 LMS is a bit pricier at $110,000.