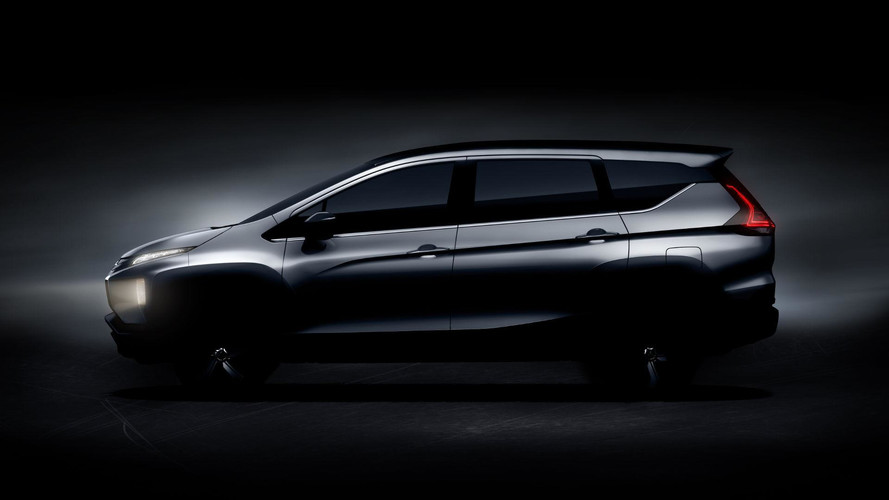 The little three-row crossover would come from Mitsubishi's factory in Indonesia.

A new batch of teasers from Mitsubishi point to how the brand intends to bring the XM concept to the road. The production model reportedly carries the name the Mitsubishi Expander – at least in the Indonesian market – and debuts at the Jakarta Motor Show on August 10.

The shadowy teasers reveal that the production model is very similar to the concept from last year. Mitsubishi’s Dynamic Shield grille dominates the front end, and thin headlights sit in each upper corner. Gargantuan driving lights are in the lower niches.

In profile, the Expander looks just like the XM, other than the addition of rear mirrors and removing the roof rails. It’s a stylish look for a crease running over the shoulders and to the L-shaped taillights. The hatch appears quite large, which should make loading cargo easy.

There are no images of the interior yet, but the Expander likely takes cues from the XM Concept. Expect three rows of seats inside and enough room for seven people.

According to Indian Autos Blog, the Expander uses a 1.5-liter four-cylinder that comes from the Mitsubishi Colt. Buyers would be able to get an optional CVT, too.

The Expander could be a big seller for Mitsubishi. Nissan reportedly intends to sell a re-badged version. Plus, Mitsubishi might look at selling the vehicle in some markets in Europe, according to Indian Autos Blog.

Production of the Expander will begin in October at Mitsubishi’s factory in Indonesia.

While North America doesn’t look likely to get the Expander, the United States should receive the new Eclipse Cross CUV. It also has the Dynamic Shield grille, but adapts coupe-like proportions to the crossover, including a steeply raked hatchback. It uses a 1.5-liter turbocharged four-cylinder with a CVT and all-wheel drive. Expect the model to arrive in the U.S. in 2018.

Tokyo, July 18, 2017 – Mitsubishi Motors Corporation (MMC) announces the global debut of its new Small Crossover MPV at the 25th GAIKINDO Indonesia International Auto Show (GIIAS). The class-leading model will combine the outstanding comfort and versatility of an MPV with the performance, strength and toughness of a Mitsubishi Motors SUV.
MMC's all-new Small Crossover MPV will come loaded with MMC technology and MMC SUV knowhow. The crossover MPV is to debut on the Indonesian market in fall of 2017. Its body will be wider and larger than MPVs in its class. With a fully optimized variable interior, the new model will bring class-topping*1 living space for seven occupants to ride in comfort. It also adapts quickly and cleverly to a wide array of cargo. It's distinctive advanced DYNAMIC SHIELD front, its large sculpted fenders front and rear, and its prominent ride height will be first sight proof of the serious SUV performance and toughness rightly expected from Mitsubishi Motors.
The new model will be produced at MMC's new Indonesian factory in Bekasi Prefecture, West Java.
The GIIAS will be held from August 10 through 20 at the Indonesian Convention Exhibition (ICE) in BSD City, Tangerang, Banten, Indonesia.
*1…Indonesian small MPV class powered by an engine with a maximum displacement of 1.5L. As of July 2017; in-house research.