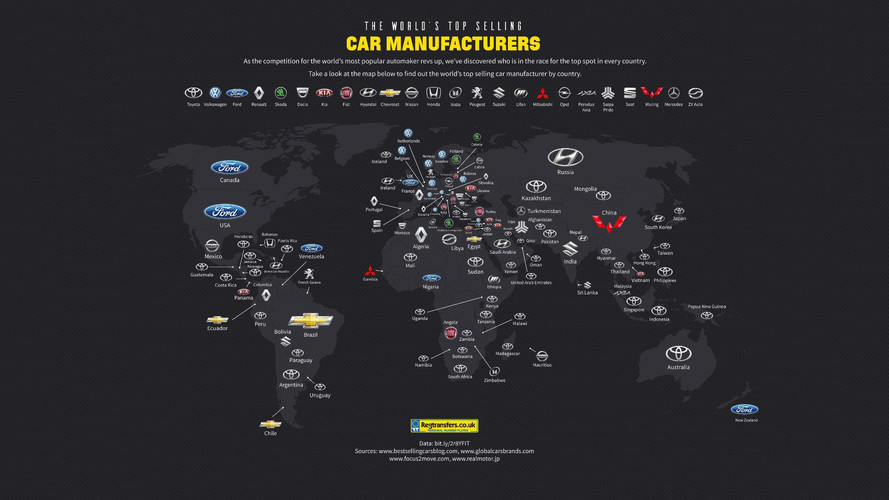 Toyota was the highest selling brand in 49 countries last year.

More than 88.1 million cars and light commercial vehicles were delivered to customers globally last year, up by 4.8 percent compared to 2015. Volkswagen was the best-selling company, followed by Toyota, but the Japanese company was actually the most popular brand by deliveries in 49 countries on the globe.

British “largest number plate dealer,” Regtransfers, has analyzed sales figures for the last year to create a very interesting infographic, showing the top selling manufacturer in every country and the world as a whole. Well, not exactly every country, but the countries where car sales stats are easily accessible.

Toyota is the sales leader in most of the countries in Latin America, Asia, and Africa, as well as Australia and the region. On the other hand, Volkswagen controls most of the European markets, while Ford is the most popular brand in the United States, Canada, and New Zealand.

If you take a closer look at the countries on the Old continent, you’ll discover most of them are quite patriotic in terms of favorite car brands. France’s highest selling marque is Renault, Spain’s best-seller is SEAT, Italy loves Fiats, and Germany is favoring, naturally, Volkswagen. Interestingly, the affordable Dacia takes the top place in four countries, namely Romania, Bulgaria, Macedonia, and Moldova.

Another noteworthy fact is that Mercedes-Benz is the only premium manufacturer that takes a sales crown. The German automaker is the best-selling brand in Turkmenistan. Also interesting is the fact that Wuling is the most sold marque in China, while Iran’s market is controlled by Saipa Pride.

Worth mentioning are also the South Korean manufacturers – Russia’s best-selling brand is Hyundai, while Kia tops the charts in Ukraine, Iraq, Syria, Israel, and Panama.

So, where do you live and which is the most popular brand in your country? Find out at the source link below.