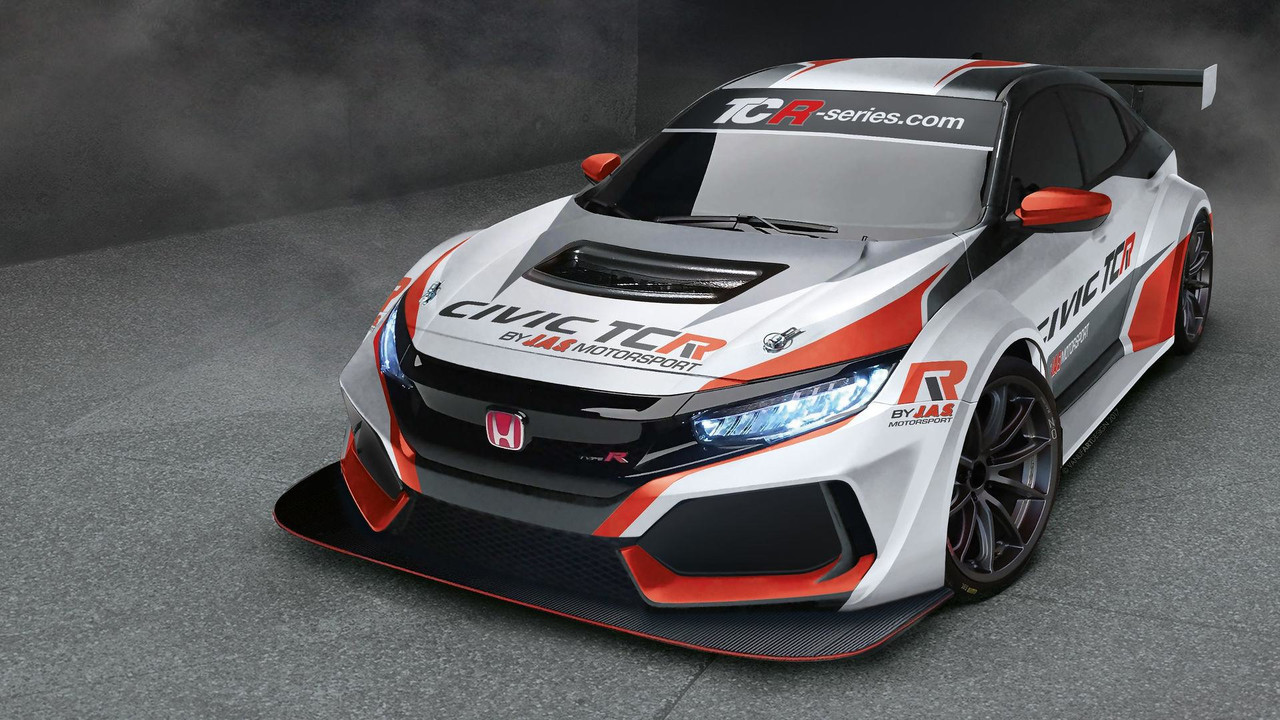 It'll be up against competitors like the Golf GTI, Audi RS3, and Ford Focus.

The Honda Civic Type R will hit the track in 2018 in the TCR series. JAS Motorsport will convert the hot hatch for racing duty.

The TCR-spec Type R features a massive front splitter that’s almost cartoonishly large. The hood scoop in also bigger than stock. Wider fenders cover the broad tires, and meaty side sills run between them. A wing rises from the tail. The setup should make plenty of downforce for sticking the car to the track. The company also offers a version for endurance racing like the VLN series at the Nürburgring, and these models feature extra lighting, driver cooling, and anti-lock brakes.

JAS Motorsport currently builds a version of the last-gen Civic Type R for TCR competition. It features a 2.0-liter turbocharged four-cylinder with 350 horsepower that turns the front-wheels through a six-speed sequential gearbox. The model currently leads the TCR International Series championship with 364 points. The Seat Leon with 316 points and Volkswagen Golf GTI with 313 points round out the current top three.

Our first Civic Type R TCR car has won five championships already and is in contention for another eight this year in Europe and Asia, and our aim is to ensure that the new car continues to raise the bar for TCR competition globally,” Mads Fischer, JAS Motorsport TCR Project Leader, said.

Deliveries of JAS’ new Type R racer begin on December 15, and the company promises to have 25 of them available to customers in time for the 2018 season.

TCR has an international series that races in Europe and Asia. There are also a wide variety of regional competitions, including Germany, Italy, the Middle East, and Thailand. Plus, there are classes for the cars in the VLN and some 24-hour events.

JAS Motorsport will introduce the all-new Honda Civic Type R TCR to the touring car world for the 2018 motorsport season.

The new car, which is based on the all-new 2017 road car launched this year, builds on the great success achieved by its predecessor since it debuted in TCR competition in 2015.

An 'endurance' version is also available for customers planning to contest championships such as the VLN and 24h Series with additional lighting, driver cooling and anti-lock braking available.

The new Civic Type R TCR continues a long and successful partnership between Honda and JAS Motorsport that began in 1998 and intensified when the Milan-based organisation was chosen to develop the first Civic Type R for grass-roots circuit racing and rallying in 2001.

Since then, JAS-developed Civics have helped Honda to become FIA World Touring Car Champions in 2013 and its partner teams to win the European Touring Car Cup, TCR Germany, Middle-East, Italy and Benelux series and the Macau Guia Race with the current Civic Type R TCR.

The new Civic Type R TCR will join the current list of 19 models and 300-plus cars eligible for TCR competition globally.

Delivery to customers is due to start on December 15 this year and the first 25 completed cars will be available for the start of the 2018 racing season, so interested parties are encouraged to contact JAS to avoid disappointment.

Mads Fischer, JAS Motorsport TCR Project Leader, said: "We are delighted and excited to announce today that we will make the new Honda Civic Type R TCR available to customers for next year and send our warmest thank you to Honda for continuing to give us their blessing for this project. The new car shows significant development in several key areas such as aerodynamics, suspension and electronics. Our first Civic Type R TCR car has won five championships already and is in contention for another eight this year in Europe and Asia, and our aim is to ensure that the new car continues to raise the bar for TCR competition globally."