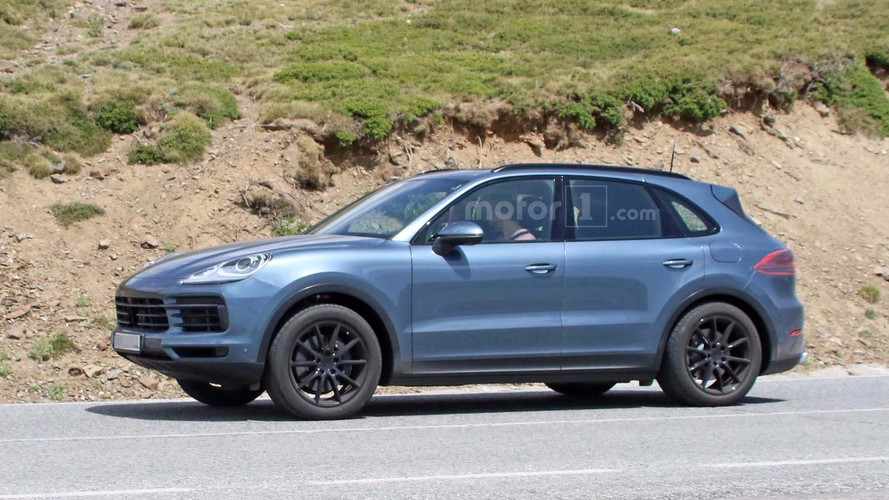 The light amount of disguise indicates an official reveal is right around the corner.

An evolutionary design has worked wonders for the latest Porsche Panamera, but will it be the same case with the next-generation Cayenne? Probably not. Seen here is a near-production prototype undergoing final testing. There are thin strips of disguise slapped onto the headlights and taillights to hide the real design, and if you look closer, you’ll see a body-colored piece of camo extending from one rear light to the other. If you’re wondering what is up with that, our money is on a continuous taillight inspired by the 911.

Judging by the fuel cap on the driver's side, we’re looking at the plug-in hybrid version, but one can never be too sure when talking about prototypes. As seen in previous spy shots, the big mouth is similar to what the outgoing Cayenne has, though it seems the vents as well as the center grille are slightly bigger now to make the SUV seem more imposing.

While the exterior design might tempt you to believe this is merely a facelift for the current Cayenne, there are some skin-deep changes behind the familiar metal. New underpinnings will allow Porsche’s engineers cut a considerable amount of weight using the MLB Evo platform shared with the Audi Q7 and the forthcoming Volkswagen Touareg.

Photos of the interior are not available in this batch, but a set from more than a year ago revealed a Panamera-like cabin, which was hardly a surprise. Bear in mind that must have been an early prototype, so things might have changed here and there since then.

The range-topping model has already been announced, the Cayenne Turbo S E-Hybrid. It will use the same hybrid powertrain as the namesake Panamera version, and if it will retain the exact same specs, the flagship SUV will deliver a gigantic 680 hp and 626 lb-ft (850 Nm). A slightly detuned version of the same hardware is expected to find its way inside the first-ever Audi S8 E-Tron set to replace today’s S8 Plus.

Judging by the minimal amount of camouflage, it likely means Porsche is gearing up to introduce the new Cayenne. We’ll likely see it at the Frankfurt Motor Show in September, if not even a few days or weeks sooner online.