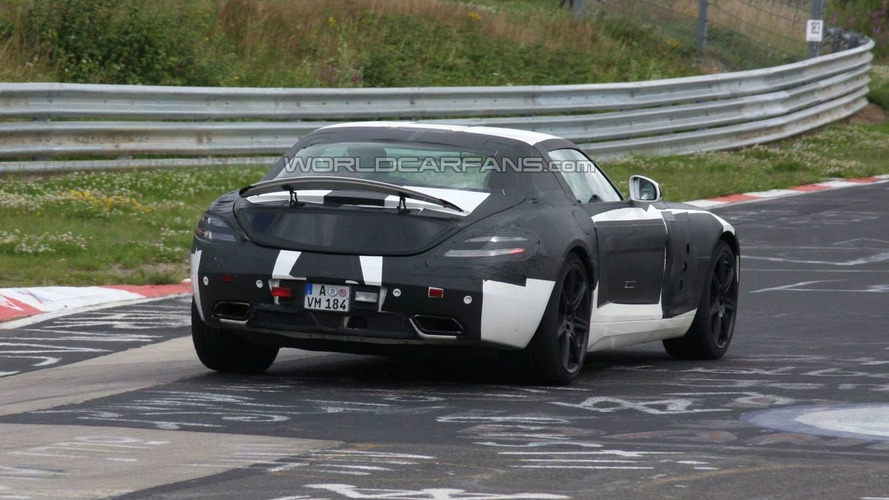 A teaser video of the 2010 Mercedes-Benz SLS AMG has been released. The disguised super car is shot doing is thing on different surfaces including tarmac and snow.

Mercedes-Benz will officially present the new SLS AMG "Gullwing" on the 10th of September, just days before it goes live to the public at the IAA. Fans who await it eagerly are now able to watch this promotional video featuring the car while still under heavy disguise. Automakers often make their own "spy" material in the form of photos and/ or videos. These are sometimes leaked out to the media so as to create hype for the car featured.

A steady stream of SLS AMG media material has been experienced over the past few months following the appearance of spy shots and videos. During that time less and less camouflage was seen. In fact completely undisguised bits such as the doors and the interior have been sent out officially.

The first supercar to be conceived and produced entirely by the AMG division sports a front-mounted 6.3-litre naturally aspirated V8 engine. Maximum power is 420kW (571hp) at 6,800rpm and its peak torque of 650Nm is achieved at 4,750rpm. Running the 20-inch rear wheels is a 7-speed double-clutch transmission which helps it go from 0 - 100km/h in 3.8 seconds. An electric-powered eDrive version is confirmed and will use four electric motors for a combined power output of 392kW (533hp) and 880Nm of torque.